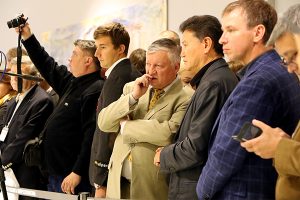 The World Championship match between Magnus Carlsen and Sergey Karjakin begins exactly one month from today in New York. At a recent press conference in Russia the challenger stated that, “If Carlsen wants to beat me he needs to show the best play of his life”. Most commentators think he may have got it the wrong way round. Karjakin gave an interview recently which you can find on http://www.chess24.com.  This is handy because if you want to know more current Karjakin news, it is best to avoid the link http://www.sergeykarjakin.com/ which will take you straight to the Carlsen website, the domain having been bought by Team Carlsen according to the Karjakin camp. Carlsen is already in New York while Karjakin flies to his Miami training camp next week. Both players achieved similar scores at the recent Olympiad until the last round when Karjakin came a cropper.