Game of the Week 6 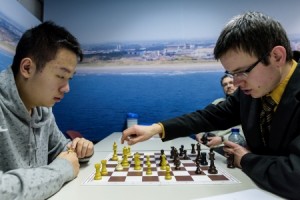 As the Tata Steel Masters Tournament enters the final straight, it has been an eventful few days for Wei Yi. After eight successive draws, he must have read our last post because, as predicted on this very site, he came out with all guns blazing in round nine to defeat David Navara – the pair are pictured right – in a cracking game. Navara, thereby, features for the third time, suggesting after his loss to Hou Yifan – sadly, defeat to Magnus Carlsen today was her fourth in a row – and victory over Fabiano Caruana that it has been a real rollercoaster week for him. In an interview after his win, Wei Yi admitted that judgement should wait until he had played Caruana the next day. Unfortunately, the world number five was a step too far for the 16 year old Wei who crashed to his first defeat in the tournament. His time will come, however. In the meantime, enjoy the following game which only confirms what we already knew, that he is a very exciting prospect.