The Broadstairs’ Club competition has started, here are the first results

Our first home chess match ever at the Bradstow Mill was fittingly against local rivals Margate and it proved to be an exciting one. Our communication network was tested early on as Chris (Board 1) phoned Reg’s home number (Margaret answered and then phoned Reg), Reg told me and I informed Chris’s opponent that Chris would be late.

On paper both teams were strong and evenly matched with the same overall rating of 6,394.

Chris Stampe on Board 1 arrived a little late and in a bit of a hurry to make up the lost time, with the black pieces he was playing the right moves to a familiar opening but unfortunately not in the right order, and his strong opponent was able to turn the play to Margate’s favour to take an early lead.

Paul Carfrae on Board 2 was able to square up the match to 1 – 1 playing his normal solid play and taking full advantage of playing with the white pieces. Meanwhile on Board 4, Michael Doyle in the unfamiliar colours of Margate, but with his familiar attacking style, overcame Paul Verrall who was making his home debut for Broadstairs.

Things were beginning to look desperate for Broadstairs with Margate leading 2 – 1 and having a slight advantage on Board 3 in a very tactical game with most pieces remaining on the board.

The Broadstairs team captain barely made the first time control limit of 36 moves and only had 1 second to spare. As the final game was played out between the two captains, Clive and Margate was ahead by 2 pawns. All was not lost though, as both players had 2 rooks and 2 bishops and as the space opened up, black managed to capture the initiative, capture back 1 pawn and then managed a forked check resulting in the loss of a series of pieces, quickly followed by a Margate resignation.

In the end an honourable, but most unlikely draw, which featured, the fat lady singing, the sick parrot and a brief appearance from Houdini, who must have slipped out from his bar opposite, before disappearing into the night.

Did you find the winning move? 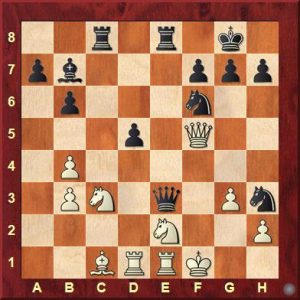 1….   Ng4 and if White captures his Queen with 2. BxQ NxB+ wins back the Queen with interest and if

At last! After an almost 20 months gap, Broadstairs chess club was able to field a team and play an over the board match against the newly formed Sandwich Chess Club (formerly Woodnesborough).

Out- rated (new terminology) on the majority of the 5 boards it was always going to be a difficult task to progress to the next round. Fredy, playing black was the first to finish finding it difficult against a very strong opponent on board 4. The match on board 2 saw the closely matched Blundell brothers battling it out against each other, with Dominic dictating the play, unfortunately a rook sacrifice, whilst forcing the play, proved inaccurate and resulted in victory for Kit and saw Sandwich taking a 2-0 lead. Broadstairs fought back on board 1 with Chris Stampe playing very solidly to beat and overcome a difficult and solid opponent.

With an outside chance of an overall win, Paul Verrall, making his debut on board 5, went right the way through to the end game with a slight disadvantage of being a pawn down, alas (a word we hope not to use much this year) some solid end game play from his Sandwich opponent meant that the game and tie was lost.

The middle board saw a solid match which was halved. It was the last game to finish and featured the most amazing move of the night when at the height of concentration, the Sandwich player with his A pawn not only took his opponent’s B pawn but followed through by then taking his own pawn!!

Great to be playing again, a loss but a most enjoyable evening and a chance to now concentrate on the league. Full results were.

This position comes from a game played in the recent World Cup, see if you can find the only way Black can get the advantage, even though he has his Queen and Knight under attack