And so the Broadstairs members can finally have a breather – all three weeks of it – at the end of the 2016/17 season before we reconvene for the new season with the AGM in September. Yesterday (14th) saw the final club night of the club year and, appropriately, it was left to the final session to decide the club champion. The Goodall Cup has been awarded every year since 1950 to the winner of the club championship and in recent years David Faldon has made it almost a private possession, having won outright or shared the trophy for each of the past six seasons. David Horton’s move to Cheltenham last year should have left the door wide open but wait….who is this upstart appearing from the wings attempting to challenge David’s domination? Why, it’s Nick McBride, only one point below David in the latest ECF grading list and half a point behind him in the Goodall after twelve games. If Nick could beat David in their final game, he would win the Goodall Cup for the first time and it would be David’s first defeat.

David then offered a draw – all he needed – which  Nick reluctantly accepted and David won his seventh Goodall Cup.  It was an interesting game but perhaps David’s unusual and not especially successful opening gave Nick the initiative that very nearly came off.

A few weeks ago we mentioned David’s start in the Over 50 section of the British Championship at Llandudno. His final score of +1 =4 -2 was respectable in a section easily won by GM John Nunn. Reference was made to an early draw that David achieved against IM Paul Littlewood and, not surprisingly, this is the game with which David was most pleased so here it is.

As the season draws to a close, I can hear the landlord ringing last orders for the Thanet Chess Congress.  I am never sure if our congress heralds the start of a new season or the end of the old. I suspect for us it is the latter but for those who have played little chess since Easter, probably the former. If you have not entered yet, there is still time as I write: http://www.thanetchesscongress.co.uk

While most chess clubs are enjoying a break from chess having closed down at Easter to re-start in September, there has been no respite for the hard-working and loyal Broadstairs members. This week’s attendance of fourteen (out of a club of twenty members, two of whom are Russian nationals in Moscow for the summer) was commendable. But then there are still three competitions to play for with only two weeks left in the season. Actually, make that two competitions because ten of the fourteen present on Monday were playing their last match in Round 5 of the Summer Swiss and here is the result:

Well done, Nick, I hear you say but not so….The prize for this competition (the John Cutting Cup) goes not to the player with the highest score but to the one with the best grade improvement over the five rounds. This will be revealed at the AGM in September. The two competitions left to be decided are the the club championship (Goodall Cup) and the knockout competition, a time handicap for the John Couzens Vase.   Fittingly, the two strongest players in the club, David Faldon (174) and Nick McBride (173) will be contesting both matches over the next two Mondays: an excellent climax to another successful season at the club. The Thanet Chess Congress – still places left but be quick as it’s filling up: go to http://www.thanetchesscongress.co.uk for more details – concludes the season and the club takes a short break before re-starting with the AGM the first Monday in September.

The quiet summer months mean that there has been no Game of the Week for some time so what about this alternative: Tactical Brilliancy of the Week? It doesn’t quite roll off the tongue as easily, does it? Some of you might even prefer Blunder of the Week but have a look at the following and you may change your mind. Last month we featured one of our old – or not so old – friends, Wei Yi. What about our other favourite Chinese star, Hou Yifan, I hear you ask? Well, she has just completed a stunning win at the Biel International Chess Festival, becoming the first woman to win in the history of the tournament with a 2809 performance. She won her last three games and possibly her finest performance was in the penultimate round against the veteran, Rafael Vaganian. Have a look at the position below and see if you can guess Yifan’s next move (Black to play).

Here is Martin Taylor, regular supporter (and sometime winner) of the Thanet Chess Congress, photographed by Brendan O’ Gorman at last year’s event in which he came second. He has entered once again this year and will face stiff competition if he is to win the Open this time. Already two International 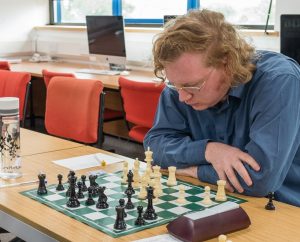 Masters, last year’s winner Alan Merry and now Richard Bates, defending his SCCU Champion title won only two weeks ago at the Weald Congress, have signed up. With two and a half weeks to go, it looks like being a competitive Open Tournament and numbers throughout all five sections are encouraging. If you have not yet booked your accommodation, you are advised to do so as Broadstairs is very busy in the summer. For more information, entry forms and online entry, visit the congress website http://www.thanetchesscongress.co.uk

While waiting for the Thanet Congress, our attention turns to the 2017 British Championship which has just begun in Llandudno. Among the various stars taking part is Broadstairs’ own David Faldon, who is in the Over 50 section. Whether he thought this was merely for players with grades over 50 is not certain but we hope he was not too surprised to be drawn against IM Paul Littlewood in round 2 against whom he achieved a draw which, together with his draws in rounds 1 and 3 represents a solid start. Unfortunately, none of David’s games is available so let’s turn our attention to the top seed (so far) at the Thanet Congress, IM Alan Merry. As I write, he has just won his round four game at the British and is currently on 3/4. Here is his win in round 1. For the latest news, go to http://www.britishchesschampionships.co.uk

Back to the Thanet Congress and never mind the chess, I hear you say, what about the food? Well, take a look at the kitchen below which is a bit smarter than your average chess congress canteen. The analysis room is attached (see below) so there is plenty of room to have your lunch and go through your games.  Rook van Zugzwang, our culinary correspondent, reports:  “The food is good, well priced and the kitchen staff can cater for specific dietary requests – just ask. Here is a sample menu: 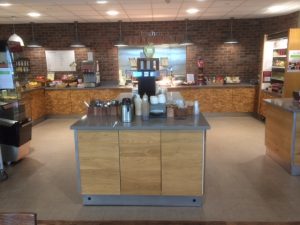 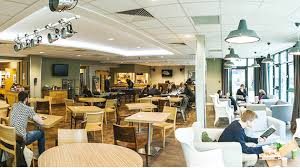 You can also have breakfast:

If you were hoping for black pudding, bad luck but egg, beans, sausage, mushrooms and bacon for £3.00?! Who needs chess? If you’re staying elsewhere, give their breakfast a miss and eat here, I say.  If you haven’t booked accommodation anywhere, there is still room at the university. Go to the Congress website listed above for details of accommodation available.”

Wei Yi in the news again

Regular visitors to this site must be wondering what has happened to Broadstairs’ adopted GM, Wei Yi. It’s so long since we heard from him that he must be at least 17 by now. Well, he is actually 18 which by chess standards is positively ancient. However, remember that he reached 2700 at a younger age than Magnus Carlsen and with his most recent rating 2746, he is 17th in the world rankings. Currently playing in the Danzhou Super-GM tournament, after four rounds he is the sole leader with 3/4. After two opening games with the black pieces, he had white against Ruslan Ponomariov in round 3, who was soon being bamboozled by a number of pawn sacrifices as Wei Yi cleared a way for his rook.

Of course, a recurring problem at super GM chess tournaments is the high percentage of draws. In order to avoid this, the organisers have instigated some new initiatives to promote positive play. According to Chess.com, “the tournament has some of the toughest anti-draw rules you’ll ever witness – no draw offers are allowed (only theoretical draws or with the agreement of the arbiter), while if the players draw by repetition within 15 moves they have to start the game again. If they draw by repetition in 15 moves again both players lose! Nevertheless, we’ve only seen three wins in 15 games.” We shall have to wait and see what effect the new rules have at the end of the tournament.

The third international chess tournament to be held at Margate in the 1930s was another all-play-all featuring ten players including three heavyweights: the then world champion, Alexander Alekhine, the American GM Reuben Fine and the rising star from Estonia, GM Paul Keres. The tournament also featured several English players who had played in the earlier tournaments but were largely thought to be making up the numbers. Alekhine did not appear to consider Keres a threat. After an early loss he said: “The next seven rounds will show if I can give an extra point to Fine.” However, in round seven his oversight became all too apparent (see game below). Keres had emerged as a player of note as a 19-year old in the 1935 Chess Olympiad and in the next few years he became a strong player of international repute with a number of supertournament victories, notably the 1938 AVRO tournament, considered one of the strongest ever played. Today he is popularly regarded as the best player never to win the world chess championship.

At Margate Keres played Fine in the last round and and their draw resulted in them tying for first place with 7½/9 (both +6 -0 =3). Alekhine, who lost three games finished third on 6½. Keres blamed himself for not winning outright, saying afterwards, “I felt that I still lacked the necessary endgame technique.” Others did not agree and in his book ‘Paul Keres II: the Road to Mastery’, Joosep Grents quotes a contemporary commentator: “The extraordinary combinational ability of Keres left a deep impression on all the participants. If one takes into consideration that he is merely 21 years old, then one can certainly foresee his future fame. The only factor that speaks against him is his modesty. No player with aspirations of becoming a World Champion has ever been known for this characteristic.”