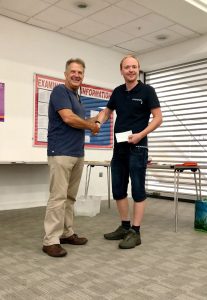 As pyramids are wider at the base than at the top, so the Intermediate and Minor sections of chess congresses tend to attract the most entries and so it was at Thanet this year. 25 entered the Intermediate and almost exactly half of all players took part in one of the two lowest sections. Although competition was close throughout the weekend,  Colin Gregory, our not-so-old friend from Margate Chess Club, emerged as the clear winner by half a point. A close examination of his results will show that this was no fluke – he took a bye in the first round, won the next three and agreed a draw in round five which was all he needed to win outright. Furthermore, all his opponents finished in the top seven with the result that Colin achieved a grading performance of 162!  Here is his round 2 victory and his opponent’s only defeat.

Players who took part in the Thanet Congress were invited to send in games they thought were worthy of a wider audience and I am grateful to Stephen Appleby of Wimborne for doing just that.  Stephen is a Thanet regular who finished joint second in last year’s Challengers tournament. He has submitted a game he played along with an apology to his opponent, Peter McGill, who has already featured in the earlier Challengers game that he lost to Edward Gray. However, it should be remembered that Peter won the Major section last year when he kindly sent in one of his best games. Peter, if you read this, I should be happy to publish your win from this year’s tournament.

The Challengers was a very competitive section with 19 strong players including some very promising juniors. One of these, Edward Gray (Sussex Juniors), shared first place with Anthony Lee (Oxford City) with 4/5. Edward has played a great deal of chess during the summer and was selected to play for the ECF England Junior Chess Squad at the European Schools Chess Championships in Krakow in July. Last year he came third in the Thanet Major behind Peter McGill.  This year it was Edward who finished higher and Peter was one of his victims on his path to glory. 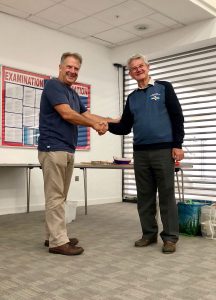