Entertaining top of the League Bridge and out rated on three of boards it was always going to be a challenging task.

Early play was promising, with Michael Jenkinson going a piece up in his match on Board 4 and before too long he had converted his advantage into a win and Broadstairs were 1 – 0 up.

On Board 2 and now playing for Bridge was Gary Hilleard, the former Broadstairs chess player. Thoughts were also with his former teammate and Broadstairs player Mike Doyle who passed away a fortnight ago. Gary went one, then two and then three Pawns up, however his Broadstairs opponent playing white was benefiting from attacking counter play options which unfortunately never really materialised and soon the overall match result was 1 – 1.

Paul Verrall progressed through to the end game and with only his King left against his opponent’s King and Pawn could at best achieve a draw, which is what he achieved preventing his opponent from converting the extra Pawn to a Queen.

At all square the deciding match on Board 1 would determine the result. Things were looking good for Dominic playing Black he was managing his time excellently at what looked to many as a drawn  end game although a pawn down. His opponent had less than 2 minutes on his clock against Dominic’s 10 minutes so Broadstairs could well win the match on time. Alas a late mistake from Dominic enabled his opponent to block and exchange Queens at which Dominic resigned as Patrick, his opponent, would have converted one of his remaining pawns to a Queen.

So, a very close overall match was converted by Bridge into a 2.5 v 1.5 win and guaranteed them the title of Steele Cup Champions.

Here is a position from a game played this week between two of the top players in the world.

There is an interesting material balance on the board, but the main issue is the weak White King, how did Aronian (Black) finish the game? 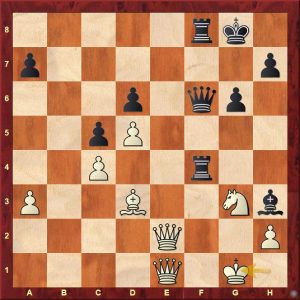 The match score was equalised to 1 – 1 when Mike Jenkinson was the first to finish on Board 6, racing to a win beating his opponent on time. Leon was unable to cope with Mike’s speed and precision.

Second to finish was Dominic who from the opening gained an advantage and then the point for win, so Broadstairs were leading the match 2 – 1. This game was quickly followed by a draw for Paul Carfrae, who with black fought back from an early lost pawn in the opening stages to agree a draw against veteran Michael Micklethwaite (remember MM  from the 1st and 50th Thanet Chess congresses in 1970 and 2019 respectively).

Yours truly, as the stand in captain and team organiser, on Board 4 found that his admin exceeded his chess playing skills on the night, having overlooked the loss of my Knight in the opening.  Margate’s Colin Gregory was always in control and made the score interesting with his win tying at 2.5 – 2.5. The chess continued to be played Boards 1 and 5 to a finish.

Arnaud on the top board had his opponents King in trouble threatening mate with his Rooks, Bishop and Queen all acting together in a concerted mate attack before his opponent lost on time.

All gathered around the final match on Board where Paul Verrall was playing his best chess game on finally beating Clive le Bague and forcing his opponent to resign with the pending threatened mate and / or loss of Queen.

An excellent, perhaps unexpected win 4.5 – 2.5 for Broadstairs who were without the services of two of their Individual Kent Chess Champions (Trefor and Manoj).

Last night we welcomed the friendly, and strong, Folkestone team. After a couple of withdrawals we had to shuffle the team, in fact the player on Board 7 was going to be the first ‘free’ club member to walk through the door. That honour went to Fredy, who was thrown in at the deep end

Fredy was the first to finish, after an interesting middlegame his opponent had just too much experience and scored a deserved point for the visitors. Next to finish was Trefor, playing a very strong opponent. Trefor managed to gain an initiative from the opening and won the exchange with a tricky combination.

So the score was once again level at 1-1

Making a cup of tea I walked past Reg’s board to witness a very brutal and correct attack from his opponent. Reg battled to defend but was overpowered with his King stuck in the centre. Soon after Manoj continued his excellent form with a very nicely played King’s Indian, stopping any action from his opponent before storming through on the queenside

At this point Arnaud was offered a draw, but declined as a win would serve the team better

The other two games both looked interesting and close, on another day both could have been drawn but it is much more difficult defending a slightly worse position that being the aggressor. Paul fought really hard but never found the counter play so badly needed; in the end his opponent found a nice series of moves to, eventually, force resignation. This left Andy battling in a Rook and Pawn ending, Andy appeared to be holding firm until retreating with his King and falling into passive defence. Andy found a way to create his own counter play but his opponent’s central connected pawns won the day.

This takes us back to Arnaud, who had held a slight edge for most of the game against one of the strongest players in the league. The players agreed a draw once the match result had been determined, Arnaud can be very proud of his play, he led the team on top board superbly 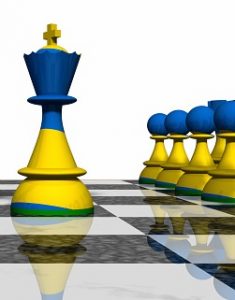 We are living in very dangerous and troubled times.