And so to Hastings.  Not having visited as either player or spectator for some years, I thought I would pop down to watch some of the top games in the masters tournament and check out the venue.  The Horntye Park Sports Complex has hosted the tournament for some years now and while it is an improvement on the pier, it lacks the comfort that the Cinque Ports Hotel provided for the top players when the Hastings Premier was held there previously. However, as Leonard Barden pointed out in his Guardian article, the problem the organisers face is that Hastings is sandwiched between the now established and successful London Chess Classic in December and the huge Wijk aan Zee tournament in Holland starting next week. Sponsored by Tata Steel, it can attract the best players: five of the world’s top ten are competing this year with the ‘weakest’ of the fourteen participants (all grandmasters) graded 2666 – only one player at Hastings has a higher grade.   A glance at the short video on their website illustrates the success of the tournament: 1800 players, 15,000 visitors, 90,000 website visitors each day etc.  Without similar investment it is difficult for Hastings – or any other major tournament for that matter – to compete.

Nevertheless, it has plenty going for it. It claims to be the oldest chess tournament in the world, dating back to 1895, and has been won by some of the world’s best players: Capablanca, Alekhine, Botvinnik, Smyslov, Euwe, Tal.  It still attracts players from all over the world today and  the top five boards yesterday featured only three British players, the rest coming from India, China, Hungary, France, Brazil, Poland and Switzerland. It may not be the ‘Premier’ invitation tournament it once was but it is still worthy of the title Hastings International Chess Congress. It also has one tradition that needs preserving and that is the excellent Chris Ward in the commentary room.  Here is a game that enthused him yesterday.

Happy New Year from Broadstairs Chess Club.  I’m sure you are all on the edge of your seats waiting for the answers to the Christmas Quiz so here they are as promised.

8. Which thrice-married former world champion described the relationship with his first wife as ‘like bishops of opposite colours’ ? (Spassky)

9. According to a study by Pittsburgh University of leading protagonists (from Philidor to Alekhine), what is the average life expectancy of (top) chess players? (60)

10. Which famous nineteenth chess player said “Love chess and it will love you”? (Anderssen) 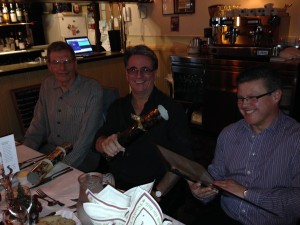 Richard, Bob and Paul at the dinner

No-one is entirely sure when it was originally decided to hold a club Christmas dinner but it was about twenty years ago.  There wasn’t one in George Stiggers’ time so it is possible that the first was in 1995 which would make this the twentieth.  (In fact, a glance at the AGM minutes should reveal all so when the club re-starts in the New Year I shall check.)

Once again, as tradition has it, we assembled at the Charles Dickens overlooking Viking Bay for a drink before wandering down to the Tartar Frigate which has hosted most of our dinners over the years. With the harbour lit up, it is a picturesue sight at Christmas and the Tartar Frigate is cosy and ideal for small parties.  Although it is a Broadstairs dinner, we have occasionally invited friends from other clubs and this year Clive Le Baigue from Margate joined twelve Broadstairs members for the meal. As well as the delicious food and wine, crackers and terrible jokes, there were two quizzes – another Christmas tradition – one, a fiendishly difficult chess quiz set by David Faldon, and the other based on the words ‘tartar’ and ‘frigate’ set by Michael Jenkinson.

As was pointed out at the AGM, Broadstairs has enjoyed another successful year financially which enabled the club to subsidise the dinner once again so not only was the evening great fun but it was also a comparatively cheap one. The club will be closed for Christmas next week, re-opening on Monday January 5th. 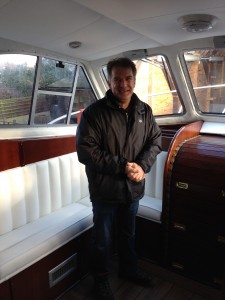 After six years – or is it seven? – the boat that John Couzens’ son Dan has been building is finally complete and Wednesday December 10th was the day set for its transfer from John’s garden to Ramsgate Harbour.  Here we see the proud owner on board although John is the first to admit that it is very much Dan’s project.  The day was bright and dry with none of the wind that was forecast although things did not go quite to plan. A burst water main caused by the giant crane followed by a burst tyre on the crane itself threatened to ruin the day but John, ever the optimist, was sure there would be time to complete the job and the BBC were there to record it (see the clip below).

Chess and the Church

This is the Telegraph’s Matt on women bishops.  Chess pedants may suspect from the alignment of the board that Matt is not a player.  While we are on the subject, it may be worth a look at the strongest churchmen and women of all time according to The Complete Chess Addict (Fox and James 1987): 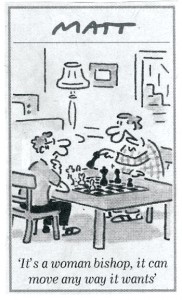 3. Rev G.A.McDonnell – perhaps the strongest of all churchmen, third in London 1872

5. Pope Leo XIII – brilliant as Cardinal Pecci before being elected Pope in 1878

6. Pope Innocent III – according to the authors, he stated that ‘killing after a game of chess is not a crime’

8. Thomas Becket – played chess with Henry II who turned out to be a bad loser

Among a powerhouse of reserves are included two more popes, Billy Graham, Cardinal Richelieu, Thomas More and Thomas Cranmer. A match between the latter two would be an interesting clash of styles.