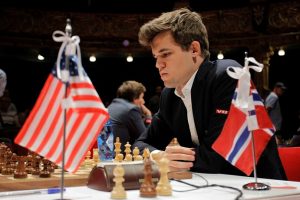 While we offer our congratulations to Wei Yi for his fine performance at the 9th Bilbao Masters, it would be churlish not to do the same to Magnus Carlsen for his tremendous achievement, finishing five points clear of a very strong field. People often complain that there are not enough wins in top-level tournaments so Carlsen’s victory is especially convincing when you consider that he won four of his ten games. It must have been a sobering tournament for Sergey Karjakin who faces Carlsen in the World Championship final this autumn and was not only beaten by Carlsen in round three but then witnessed this demolition of Wesley So, the world number eleven, in the next round.