Broadstairs held its Annual General Meeting on September 7th and in the picture on the left we see Reg Pidduck with his array of trophies: the Zielinski Shield, the Oyster Shield, the John Cutting Cup and the Walker Shield, the latter awarded to Reg as captain of the team that won the U115 Walker Shield competition in the Thanet League.  Other winners on the night were Bob Cronin, who won the George Stiggers Trophy for the best grading improvement, and David Faldon, who shared the Goodall Cup for the club championship with David Horton (absent on holiday).  This is David’s fifth successive victory but he has some way to go to overtake the most wins (nine). 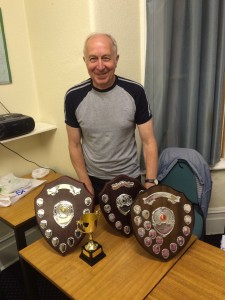 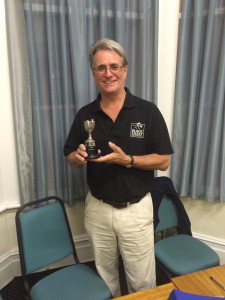 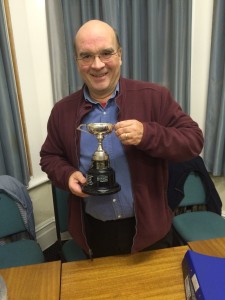 It was reported that it had been another successful year for the club both in terms of numbers and finances.  The present subscription rate is to be maintained and it was decided that the club should once again subsidise the Christmas Dinner as it has done in previous years.   The current committee was re-elected en bloc with David Faldon taking over as captain of the Mick Croft Cup side. A surprise move was the decision to adopt Fischer time for the Goodall Cup and Summer Swiss competitions.  This is the second change in succession after last year’s decision to abandon the traditional rate of 36 moves in 90 minutes with an additional 15 minutes for all remaining moves in favour of all moves in 105 minutes in keeping with a similar League decision which has proved unpopular with many Thanet players. The introduction of Fischer time at the recent Thanet Congress was warmly received by those Broadstairs players taking part and it was felt at the meeting that the decision to use the same time control for club competitions was a typically positive and innovative one that would be appreciated by all members.