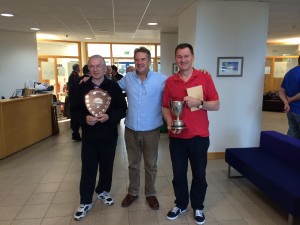 Broadstairs Chess Club was well represented at the 45th Thanet Chess Congress in August. Of the ten members who took part, congratulations go to Michael Doyle, who finished second in the Minor section with 4/5, to Joshua Vaughan who won the grading prize in the Minor for the best score by a player graded under 80, and to Bob Page who won the Intermediate section with a score of 4.5/5. Michael also won the Oyster Shield for the best performance by a Thanet player over the age of 60. Many thanks are due to another Broadstairs member, John Couzens, who sponsored the event for the eleventh year and who can be seen here presenting Michael and Bob with their prizes.