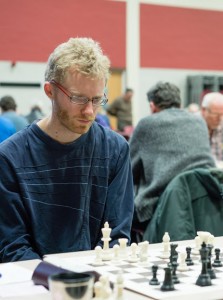 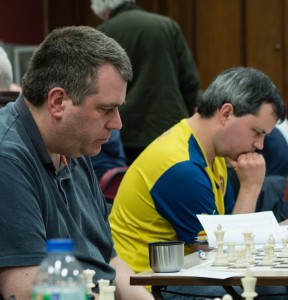 At the recent St Albans Congress two faces familiar to Broadstairs players were participating in their respective sections.  Toby Stock (left) was a member from 2009-2011 before moving to Mexico to be with his girlfriend. Now married and a father, he is back in the UK living near Cambridge, and has started playing chess again. He was in contention for a possible prize in the Challengers (U180) before losing his last game to finish on 2½/5.  Older players may remember Toby’s father, William, who played for Birchington for many years.  After twenty years he has emerged from a self-imposed chess exile and is playing for Rainham where he now lives.  At St Albans he scored 3/5 in the Minor section (U120).

On the right is Oliver Finnegan, who won the Goodall Cup (the club championship) in 2001 and played for Broadstairs for a few seasons at the start of the millennium. He now plays for Loughton in Essex and scored 2½/5 in the Major section (U160). He was disappointed and with a January grade of 158, that’s understandable. He asked after current members and said he saw David Wheatley and Clive Le Baigue recently. We may see him at the Thanet Congress in the summer.