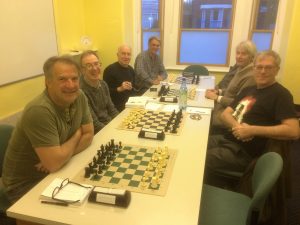 (Board positions based on July grades)

Another close match saw Broadstairs’ poor run both continue and end with a disappointing final game and result against Woodnesborough who won on the top two boards to secure a 2.5 – 1.5 win and this despite being outgraded on all four boards. The positive was a secured win on Board 4 by Bob Cronin who again demonstrated the team’s strength on the lower boards and he was the first to finish to secure an early point. Reg was last to finish on Board 3 with a certain drawn position and with added time pressures it was pointless for him to continue and attempt to draw the match by trying to win a certain drawn game whilst under such time pressure. On the top board, from being a pawn up John made a blunder losing a piece for a pawn and solid play by his opponent meant that it was a long night for him as he sought to get something from his match but to no avail as his disadvantage went into a losing end game resulting in a certain passed pawn and queen for his opponent. On Board 2, the team captains came head to head in what could have been a drawn game and match for Broadstairs, but the lightning quick play of the Woodnesborough captain saw him force the Broadstairs captain to go down with the ship, losing on time on move 70 with just a rook and two pawns on the board. So the Broadstairs name will not be on the Hargreaves Shield this year. It could be the new name of Woodnesborough or the winners of the Margate v Bridge match – a close league this year with a guaranteed maximum difference of two points only separating all four teams.
Posted in: 2016-17, Results & Reports (2016-17)