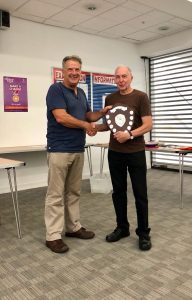 It’s always a pleasure to see local players winning at the Thanet Congress and once again Broadstairs’ own Reg Pidduck collected the Oyster Shield for the highest score (3½ points in the Minor) by a Thanet League player aged over 60 in either the Minor or Intermediate sections. This is the fourth consecutive year that Reg has won the award and the sixth time in all. Well done, Reg! Here he is (left) being given the shield and congratulated by the Gullbuster, John Couzens. Charlotte, the photographer reminded John that he would qualify for this award soon but that he would have to win some games first.

There was a three-way tie for first place in the Minor tournament between Broadstairs’ Joshua Vaughan, David Archer (Godalming) and 10 year old Emily Maton (St Albans Early Knights) The key game here came in the final round between David and Emily with both on 3½ points. However, their draw gave Josh the chance to win outright as he was also on 3½ at the start of the round. Hats off to David for his coolness in heading off home, not knowing if he would finish first or second. In fact, the end was very tense as Josh looked to be winning but could not convert his rook v two pawn advantage and had to settle for a draw. 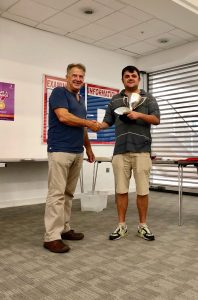 As a local player, however, he qualified as the Kent Minor Champion and was presented with his trophy from John (see photo). David was unable, therefore to collect his prize but he has submitted one of his games that he thinks is worth a wider audience. In his own words, “I liked this game because it was well fought, very close and an unusual finish. My opponent has not been playing very long and clearly shows great potential.”