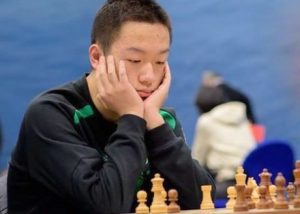 Alas, our young friend Wei Yi is not playing at Hastings although he is appearing at the slightly grander Tata Steel Masters at Wijk Aan Zee starting next week of which more anon. As a warm-up to the event, he has been competing in the Hengda Cup, a 4-game classical match against the Czech number one David Navara in Yancheng, China. The winner gets $20,000, the loser $10,000 (not bad for a four-game two-horse race – the winner at Hastings gets £2000!). After the four classical games, the scores were level 2-2 so they then played two 5+3 playoff games resulting in one win each and so here we are again….it’s Armageddon time! The players play one game where White has six minutes to Black’s five but Black only needs to draw the game to win the match. The game was level for most of the time and Black may well have got the draw he needed but watch out for our hero’s 37th move which may look strange at first until we realise that Black can force a draw! Therefore, with one move Wei Yi was $10,000 richer.