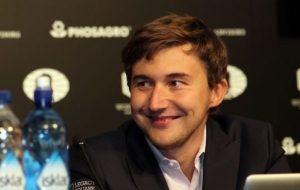 Karjakin reflects on his victory

After a series of draws, some more interesting than others, the World Championship finally came alive in Game 8 in sensationally unexpected fashion with a win for the challenger, Sergey Karjakin with the black pieces. Commentators agree that the World Champion has not been playing well and it seemed as if Carlsen was determined to win this game with the advantage of the white pieces. However, over-pressing in time trouble, he blundered with disastrous consequences.  His problems did not end there because in frustration he later stormed out of the press conference, a contractual obligation with a 10% deduction in prize money the consequence i.e. a minimum of $40,000. Needless to say, the official Russian chess website celebrated the unexpected win with understandable delight, imaginatively comparing Karjakin’s eighth round ‘knockout’ with Muhammad Ali’s defeat of George Foreman in the same round of the Rumble in the Jungle when Foreman, like Carlsen, was the overwhelming favourite. The difference here is that Carlsen has four more ’rounds’ to recover which Foreman did not. However, the hubris of his statement at the opening press conference (“I’ll punch him until he finally knocks over”), which the Russian blogger, Vladimir Barsky, took great pleasure in repeating,  may come back to bite him.   Game 9 takes place tomorrow (Wednesday).