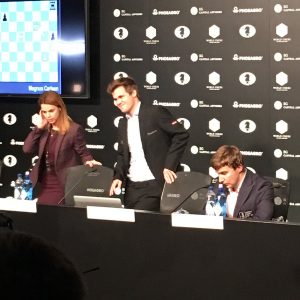 A relieved Carlsen at the press conference

You would have had to stay up late on Thursday evening to see Magnus Carlsen finally break his duck and level the score in the World Championship at 1-1 with two games to go. Who would bet against the Champion now, especially as he has the white pieces in Game 12? Many experts are predicting a tie break, however, which would be decided next Wednesday, Carlsen’s 26th birthday.  The theme in this match appears to be the consistency of the players’ inconsistency.  True to form, there were moves in this match that puzzled the commentators, none more so than Karjakin’s 20th move. After 20. Nd2 he had the chance to force a draw with 20…Nf2+! He claimed at the press conference that he had overlooked the resulting fork had Carlsen not repeated, winning the queen. Instead he played 20….d5 almost instantly, a move described by one commentator as “one of the most shocking moves of the entire World Championship”! Eventually, Carlsen’s pressure told and after yet another six-hour game it was the challenger’s turn to wilt.

After two wins in the last three matches, the excitement is spreading beyond the chess world. After Game 8 The Independent went so far as to say with apparent sincerity that “The most exciting sporting event on the planet right now is the World Chess Championship match in New York!” although the article’s sign-off line, “It’s exciting stuff, people,” was less than convincing.   To his credit, there was no sulking from Karjakin who, unlike his opponent the other day, fulfilled his contractual obligations by turning up to answer questions at the press conference. This time it was Carlsen who had the last word: “It’s a huge relief. I haven’t won in ten games and that’s basically something that hasn’t happened to me. It’s been a struggle, and it’s still going to be a struggle, but at least now we’re fighting on level terms.”