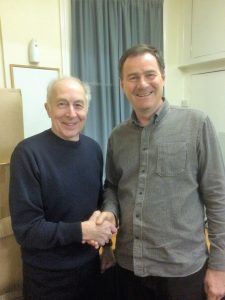 Every year has its anniversaries but 2016 seems to have had more than its fair share: the death of Shakespeare, the Battle of Hastings, England winning the World Cup……and now we can add one more that appears to have been overlooked in all the hullaballoo. It is forty years since Reg Pidduck joined Broadstairs Chess Club and ten years later Bob Page played his first match. There will be another anniversary of sorts in two years’ time because it will then be twenty-five since they became Treasurer and Secretary respectively of the club. For now, the coincidence of forty and thirty years’ service seemed a good excuse for celebration and so the idea of an anniversary match was born.

Twenty players – sixteen from Broadstairs and four friends from local Thanet clubs – were divided into two teams, the Rubies, captained by Reg, and the Pearls, captained by Bob. Each team had equal grade totals and the draw was made on the night. A recipe for numerous mis-matches, I hear you say but not so because this match was run on a fiendish time handicap. With a two-hour limit, the least anyone could receive was ten minutes and when David Faldon (179) was drawn against Viktor Selyukov (73), that is precisely what he got with Viktor getting the remaining one hour fifty minutes. David would still have fancied his chances but the evening got off to a sensational start. 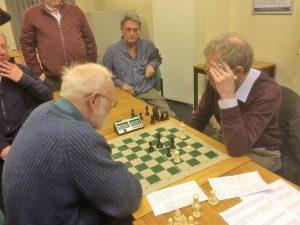 Viktor won his game on time to give the Pearls a surprise 1-0 lead.  The Rubies soon fought back, however, when Viktor’s twelve year old son, Timofey (111) provided another shock, beating Ian Hames (160). Thereafter the lead swung to and fro as the Pearls’ 3-1 lead became a 4½-3½ defecit – Bob and Reg appropriately agreeing a draw in their match – with two games left. Clive Le Baigue looked likely to win against John Clarke in the all-Margate clash which would make the scores level with just Andy Flood’s game against Colin Gregory. Have a look at the position and see what you think. Typically, Andy said later that if he had known the score he would have offered Colin a draw. In the event, time told as is often the case, Colin made an error and Andy won. The match lasted the entire two hours, by no means a given with time handicaps, which was ideal and everyone then adjourned to the pub with a promise to repeat the match in thirty years’ time.