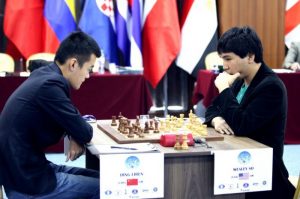 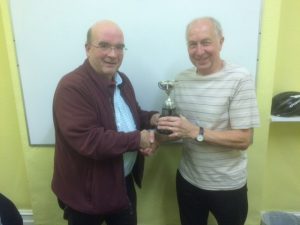 Congratulations to David Faldon who won the Goodall Cup, awarded to the winner of the club championship, for the seventh time. He has a few more years to go before he can claim to have won it more times than anyone else but who can stop him? At the AGM we heard how it was a close run thing, however, with Nick McBride taking him to the final game of the season.   Other trophies awarded at the meeting were the Zielinski Shield for the best performance by a player in the bottom half of the draw, which went to Michael Doyle, the George Stiggers Trophy, awarded to Joshua Vaughan for the most improved player, and the John Cutting Cup for the player with the best grading performance in the Summer Swiss (Paul Carfrae). The John Couzens Vase, the knockout trophy, has still to be decided with the final between David Faldon and Nick McBride. Finally, the Oyster Shield for the best score by a senior Thanet player at the congress was awarded to Reg Pidduck for the fifth time! There were also two team trophies to award: the Micklethwaite Shield for the Team Buzzer tournament was presented to Nick McBride who was unbeaten in a team that included David Faldon, Paul Carfrae and Bob Page; and the Julius Day Trophy was awarded to David Faldon who captained a six-man team that were joint winners of the Jamboree: alongside David were Nick McBride, Bob Page, Paul Carfrae, Andy Flood and Michael Doyle.

The members were told that it had been another successful year for the club: numbers were constant, finances were a little down on last year but this was easily explained by Reg Pidduck, the Treasurer: new DGT 2010 clocks accounted for most of the loss and there would be no major expenditure this coming year.  Most important, the club is in a healthy financial position with more than sufficient funds. Bob Page said that the website continued to be a great success with 28,000 hits in the last year and over 3000 in one month alone. The same can be said for the new Thanet Congress site that he set up. On that note, Andy Flood said that the congress had been successful with a £500 profit replacing a £500 loss last year. He thanked all those who helped and especially the three main sponsors, John Couzens Roofing, Chandlers Building Supplies and Cramptons Broadstairs.