Broadstairs   ½      Folkestone   6½
David Faldon writes:
Another away match, another heavy defeat, but as with our first match of the season there was nothing to be ashamed of in this. We’ve now played our two hardest fixtures and the only way is up.  The match was always going to be difficult. Folkestone are even stronger than Bridge A and seem determined to take the Millar Cup this year. They’ve already beaten Herne Bay and now only Bridge stand in their way.  The games were not quite as one-sided as the results suggest, except on boards one and six.  With white on board one, I tried an early g2-g4 line against the Pirc. This didn’t work out too well, partly because (a) my opponent saw me try it in the Thanet Open this summer and (b) my opponent used to play the same line himself. Oops! On board six, Michael (with black) tried the Birmingham Defence: 1. e4 a6. It has worked well for him in the past but unfortunately his 152-rated opponent found a nice trick right in the opening and Michael had a long wait for his lift home. On the other four boards Alan, Bob, Paul and Andy made their opponents work long and hard and find some good moves. In the end only Bob on board three survived the test. As in our first match at Bridge Bob was the last to finish, but unlike in our last match this time Bob’s new solid style got its just reward. Well done, Bob!  Many thanks to everyone who turned out in Folkestone, and special thanks to those who drove: Andy, Alan and Paul. Folkestone is a long way to go on a Friday evening.
20Sep 2014

News from the archive 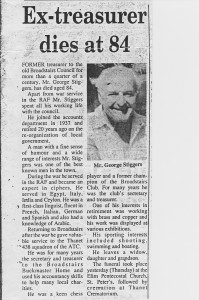 This is one for those with long memories. It is twenty years since George Stiggers died and this obituary from the Thanet Gazette shows what a talented man he was.  His contribution to chess naturally cedes centre stage to his other achievements yet to say that he was ‘for many years the club’s secretary and treasurer’ is an understatement: George did both jobs for the best part of half a century. He also captained the Millar Cup side – only one competition in those days – and was general factotum of Broadstairs Chess Club during all that time. He was the first winner of the Goodall Cup in 1950 and won it for the last time in 1974. It was only ill health that persuaded him to relinquish his responsibilities at the age of 83. The club created a new trophy in his memory for the most improved player over the course of a season.

We out graded Margate on all boards but it was not that easy.

Board 4: Walkover.  Margate’s Ashley Cordery was unable to get to the match so our Bob had an early bath.  1-0 up to us.

Board 3: Tough James.  Captain Reg had the worst of it against James Maskell in the opening and at one point tried to get a repetition of moves. But James was having none of it and backed off. This allowed Reg to swap off queens and get a two rook attack on James’ weakest pawn but James defended well enough and a draw was agreed.   1½-½ to us.

Board 1: Leon defends.   Andy Flood’s game against Leon was cat and mouse with Andy being the cat and slowly creeping up the board and controlling more and more squares, but Leon’s pieces all gelled together to prevent Andy getting through, Another draw agreed.  2-1 to us.

Board 2: Match of the Day.   John Clarke finally broke through David’s defence with a bishop sac and getting two passed pawns for his trouble. David then had to sac his last knight to stop one of them queening but could not stop the other. Then it got really interesting: John’s king and queen against David’s king. Easy? Not so! John only had about 20 seconds left on his clock to get the mate. David moved fast so that John did not have time to collect his thoughts then just a couple of moves away from the mate, John’s time was up. As David did not have mating material, the game was drawn . What an exciting game and a credit to both players. 2.5-1.5 to us.

Millar Cup v Bridge A (a)

Broadstairs    1   Bridge A   6
David Faldon writes:
So, a heavy defeat to start the new season, but the performance was nothing to be ashamed of against an overwhelmingly strong side. All of the games were hard-fought, especially the game on board two which went right to the limit of the new time control (all moves in 105 minutes) and so finished after 11 pm. Bridge, a club with a huge array of strong players but with two teams to fill, paid us the compliment of selecting a strong A side for our first meeting of the year. Their players outgraded ours by 30 or more points all the way down. Of course this grading differential is more significant on the lower boards, so boards 4 to 7 were expected to struggle, and struggle they did. Still, a 0-4 result on the bottom four boards was a bit harsh, although from what I saw none of our players did anything silly or missed anything obvious. You simply have to congratulate the Bridge guys for playing very well. The mini-match on the top three boards was different, however. It wouldn’t have been against the run of play for us to have won 2-1 or better, but in the end it wasn’t to be. Paul had slightly the better of a rook and pawn ending on board 3 but a draw was a fair result in the end. David had a huge attack on board 1 but his opponent pulled out a surprising series of sacrifices to force a perpetual check. Disappointing. Bob on board 2 got into a difficult position with black against an unfamiliar opening and lost a pawn but fought back well. As time ran out Bob found a clever defence in a position where I (DF) expected him to resign but unfortunately his resourcefulness went unrewarded when his opponent discovered a neat way to swap queens into a won ending despite only having seconds left on his clock. Another disappointment. Still, there were grounds for optimism in defeat. If we all play this well we’ll win many of our matches – maybe even the return against Bridge A in January? Why not?
13Sep 2014 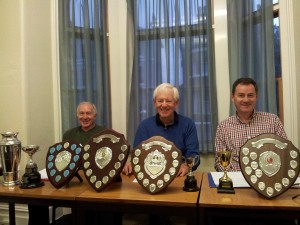 Reg, David and Bob at the AGM

At the annual general meeting on September 1st it was announced that 2013/14 had been another successful year for the club.  Financially Broadstairs is on a sound footing and two new members joined the club with the prospect of more this season.  The Hargreaves Shield was won, the Millar Cup team performed creditably and could boast a genuine (and rare) victory over Folkestone, and there was individual success for Broadstairs members at the Thanet Chess Congress.

The President, David Horton, entering his fiftieth year as a Broadstairs player, was re-elected as were Bob Page as Secretary and Reg Pidduck as Treasurer.  David Faldon continues as the Millar Cup captain, Andy Flood takes over as captain of the Hargreaves Shield side and Reg Pidduck will captain the Walker Shield team. Among the awards presented on the night was the Thanet Shield, a new trophy instigated by Broadstairs to go to one of Broadstairs, Ramsgate or Margate clubs based on respective results between the three in the Thanet League. (Contrary to its title, only three of the seven teams in the league come from Thanet!) It was decided that if the other two clubs agree, the competition would be extended this season to include results in the Hargreaves Shield.