China sweeps the board

The 43rd Chess Olympiad is over and we can now (almost) confidently announce the winners. Chess 24 has all the results and if you click on ‘standings’, it has the following: 1. USA 2. Russia 3. China. All three are level on 18 MP (match points?) but the USA and Russia have 29 BP (board points?) to China’s 28½ so that seems to suggest a tie break between the USA and Russia which could be fun. However, a check on chessresults.com shows four separate tie breaks with TB4 appearing to carry most weight although it’s not clear what it stands for. Crucially, though, it has China first with 149, the USA second with 147 and Russia third with 144. All three teams won 8, drew 2 and lost 1. (Incidentally, congratulations to the England team who won 8 drew 1 and lost 2 to finish in an excellent fifth place – their best finish for 22 years.)

There was still confusion amongst contributors to the official website’s message board even while the closing ceremony was taking place. This was an event in itself with medals handed out like confetti in a programme interspersed with an unusual choice of songs from local singers (‘Chain Reaction’, ‘Cabaret’) adding to the consternation of chess fans messaging (“Who is this woman?” “No, not another song! Where’s my gun? I can’t stand any more!”), alongside some more unrepeatable remarks, the most charitable of which questioned her ELO rating. Medals were handed out for first, second and third individuals in five categories: reserve then boards 4, 3, 2 and finally 1.  With some confidence I can announce that Ju Wenjun of China won the prize for best women’s performance on board 1 with 7/9 and Ding Liren for best male on board 1 with 5½/8. However, a further ‘gold medal’ was then awarded to Ju Wenjun – ok, this seems to confirm her place as overall female individual winner – and Jorge Cori from Peru, who scored 7½/8 including seven games as White! He was rested for the last round, perhaps to protect his score.   One can only assume that there must be some seeding of opponents faced when judging the individual winners because England’s board 1, Jovanka Houska, had a terrific tournament, losing only one game and finishing with 7½/9. However, two of her opponents were under 1800 whereas Ju Wenjun did not face anyone below 2300. 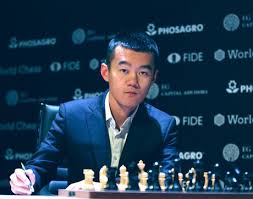 After yet more music the final medals for the top three teams were awarded. (There had earlier been medals for the top three teams in about four other categories but remember – there were almost 200 teams taking part.) Eventually, China was confirmed as winner of both the men’s and women’s competitions although, interestingly, the tournaments were named ‘Women’ and ‘Open’.  After each of the team winners was announced, an anthem was played and everyone stood up but whether this was the Chinese national anthem or a FIDE anthem – one wag suggested ‘Georgia on my mind’ would be more appropriate – was not clear and the Chinese players certainly did not seem to accord it much reverence.  As for Wei Yi, he had a rather modest tournament. After winning his first two games, he did not win another, was not selected for the last two matches and finished on 3½/7. Congratultions to Ding Liren, however, who was unbeaten in the competition, played for the winning team, took the medal for the best performance on board 1 and played one of the best games in the tournament in the crucial defeat of Poland in the penultimate round.