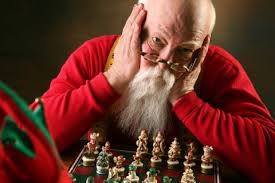 Father Christmas popped into the club for a game of chess on Monday but he clearly wasn’t happy with the set he had to play with as you can see. However, he did suggest a few questions for the annual Broadstairs Christmas Dinner next Monday but I thought it best to advertise the quiz now. It’s a mixture of the fiendishly difficult, the trivial and the downright silly. (As I write this, not all questions have not been set so I hope they live down to the billing.) I am confident that no-one will get them all right so I am offering free entry to the 2018 Thanet Chess Congress to the first correct entry received by December 31st. Results will appear in the New Year.