Twas a week b 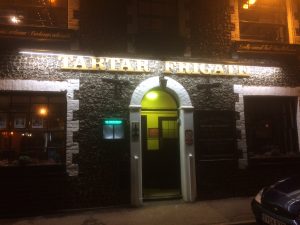 efore Christmas and inside the pub all the Broadstairs members were tucking into their grub…Yes, folks, in case you haven’t noticed, it will soon be Christmas which can only mean one thing: the Christmas Dinner.  The venue for this celebration has more often than not been the Tartar Frigate in Broadstairs harbour which is enigmatically described on its website as ‘one of the only 18th century flint restaurants in Kent’. Only how many? Without delving into the archives we can’t be sure how many club dinners there have been but we are confident that the Tartar Frigate pre-dates the first. 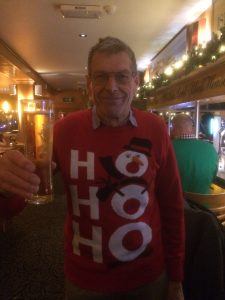 Tradition has it that we meet in another of Mr Thorley’s eating and drinking establishments, the Charles Dickens, before moving on to the Tartar Frigate where fourteen members sat down to a delicious meal, generously subsidised by the club. Actually, only thirteen were Broadstairs members – the fourteenth was our guest, Clive Le Baigue, an old friend of ours from Margate Chess Club.  Midway through the evening it was time for the quiz – another tradition. In the past we have had quizzes purely about chess, others about Broadstairs, occasionally a mixture of the two. This year David Faldon produced an amusing multiple choice quiz on all things chess related and otherwise. We even had a poetry recitation (‘The Road Not Taken’ by Robert Frost) from David Clifford, who added some Shakespeare for good measure. 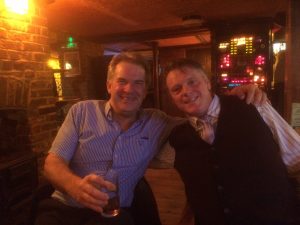 Alas, there were no prizes, not even for Richard Bowles’ splendid Christmas jumper (see photo above). Towards the end of the evening, people began to drift away as taxis called. David Clifford’s chauffeur – his grandson, Elliott Boyes once of this parish – turned up to say hello and before long it was closing time for the Tartar Frigate. But that was not the end for some. The Dolphin called and there was time for a few more drinks and one final photo of John and Clive doing their best to pretend that it was not really 12.45 a.m.  Please note that Clive is still wearing his tie, striking a blow for the sartorial elegance of chess players everywhere. Many thanks to all those who attended. The club now closes for three weeks for Christmas and the New Year, re-opening on January 8th 2018. Meanwhile, don’t forget the Christmas Quiz and finally a ‘Happy Christmas to all and to all a good night!’