Broadstairs Chess Club is currently in a healthy position in many ways. Firstly, the club is financially sound with a secure venue that has been its home for the best part of seventy years. Secondly, results this season have been very encouraging. The club has already won the Mick Croft Cup and the Team Quickplay while all three league teams are well placed in their respective divisions: the Millar Cup team is second, the Hargreaves Shield team is top with a 100% record while the Walker Shield team is second in an increasingly tight league with several matches still to play. Finally, team spirit is good. The new players have been a magnificent addition to the club and appear to be enjoying their chess. All have made significant contributions to the club’s success as is evident from the latest ECF grades. To quote two examples, Paul Johnson’s grade has gone from 116 to 129 while Richard Clement has improved from 129 to 145. Amazing! One consequence of this influx of new players is that the internal club competitions have become extremely competitive and the end of the season promises to be very exciting. Wisely, the stronger players have largely avoided each other at this stage and appear to be circling like wild animals waiting for the other to make the first move.

The Goodall Cup, the club championship, is intriguingly poised at this half-way stage. The excellent ECFLMS site has all the results which can be viewed on a regular basis with weekly updates. A glance at the statistics (click here) shows that the leaders – if we go by highest percentage success rate and games played – at this stage are as follows:

A lot can happen with 19 games to play altogether and much will depend on results when the mighty stags lock horns. In the meantime, Richard Clement is the early front-runner. Can he keep it up? Watch this space.

The situation in the knockout competition for the John Couzens Vase is similar. This is, of course, a time handicap and at the AGM it was agreed to tighten the rules this year so that the minimum time for the stronger player has now been reduced from 7½ minutes to five. This is in a two-hour game so that in such pairings the weaker player gets one hour and fifty-five minutes! The aim is to allow everyone a reasonable chance of winning the competition but it has not quite had the desired effect yet with most the big guns still firing. However, we shall see as sooner or later the stronger players may well play each other but will that allow one of the outsiders to sneak up on the inside?

There was an excellent turnout at the club last Monday with 18 of the 20 regular members playing which is another positive sign. Broadstairs has never been a large chess club and a glance at the archives bears this out. 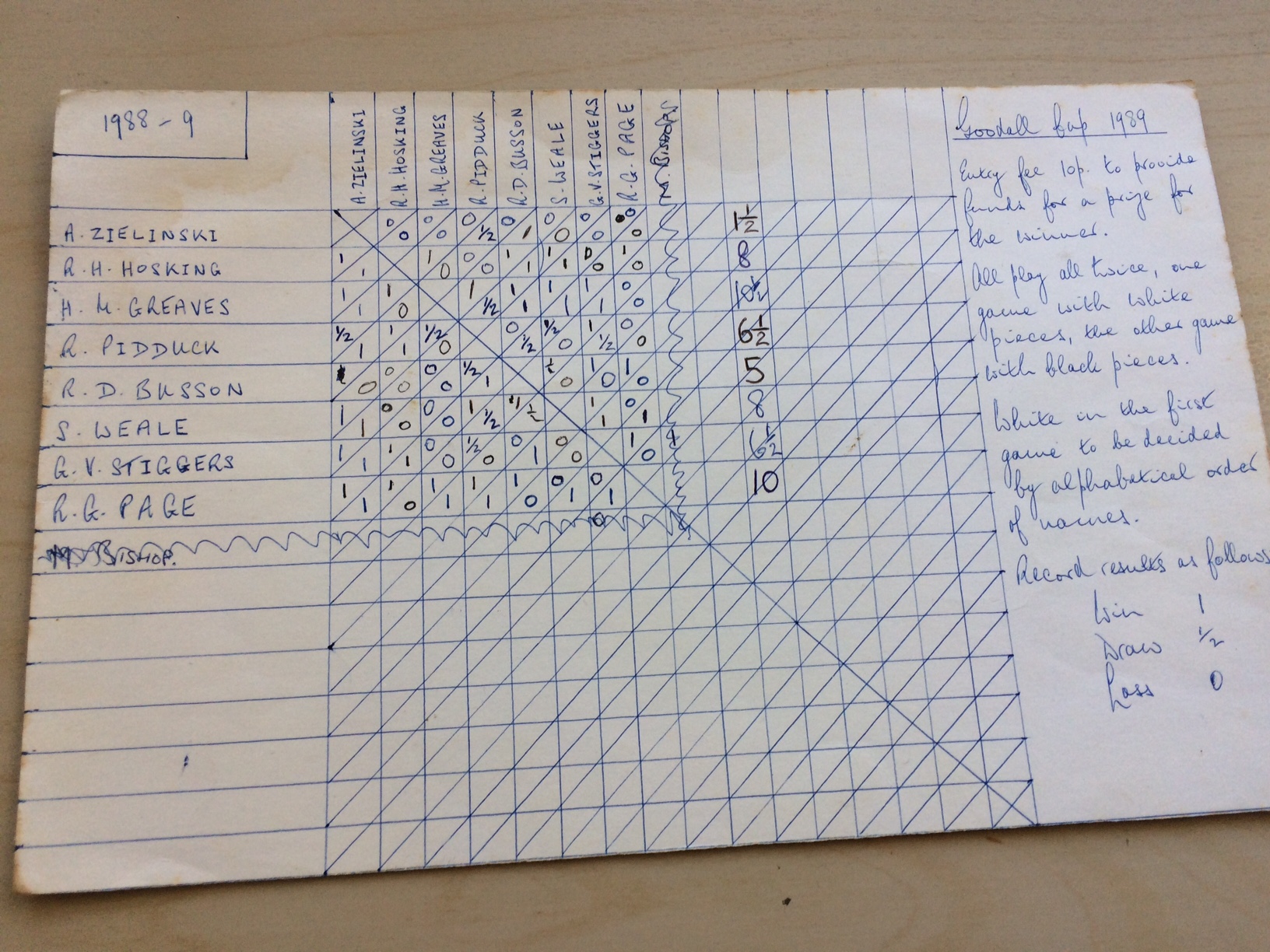 Here we have a copy of the Goodall Cup sheet from thirty years ago. The first thing to notice is that only eight players took part – this season it is twenty – and the second is that it was an all-play-all twice competition. This was common in those days until increased membership meant that more than twenty games would have to be played. The handwriting is that of George Stiggers, long-time secretary and treasurer of the club. Note the entry fee of 10p ‘to provide funds for a prize for the winner’. Not sure when that was abolished but there is no financial reward today just the kudos of winning and your name on the trophy. Note also that ‘White in the first game to be decided by alphabetical order of names’. This was a permanent gripe of Alek Zielinski’s as he was destined forever to play all his games as Black before once playing as White. (At the time I tried to find if there was anyone on the ECF list with a name that would come after Alek’s alphabetically and there was only one, Malcolm Zukunft, who was a member of Herne Bay Chess Club, only a few miles away from Broadstairs.) Finally, look at the results: Mac Greaves won by half a point to record the eighth of his nine Goodall Cup victories, a total that was matched in 2018 by David Faldon. Will 2019 see David become the first player to win ten Goodall Cups? This could be his toughest test yet.