In 1990 the British Chess Championships were held in Eastbourne in the middle of a heatwave. Stewart Reuben began an early question and answer session with the following greeting: “Welcome to the hottest British Championships on record!”  But it was August and heatwaves are more common then than in February when the Kidlington Congress is traditionally held. The 42nd Congress took place two weeks ago and a glance at the photo of the venue above shows that players faced very different conditions and challenges even before they sat down to play chess.

Kidlington has long been a regular feature of the chess tournament calendar on the first full weekend in February. The first Kidlington Chess Tournament was held in 1978. It had two sections and offered a guaranteed minimum prize fund of £130. In its second year Exeter Hall became the venue where it has remained ever since.  In 1981 an intermediate section was added and in 2012 a fourth section for Under-120 players. The Open section serves as the second leg of the Oxfordshire Individual Championship with the County Champion being the eligible player with the highest combined score in the Open sections of the two weekend tournaments held in Oxfordshire during the season, namely the relatively new autumn congress at Witney (2018 was its sixth year) and the Kidlington tournament.

The congress is very popular: for the past two years it has played to a full capacity (192) and the maximum was reached this year with ten days to go. A waiting list was established which proved to be a good idea as the weather took its toll and there were some withdrawals but fortunately fewer than expected according to Gerard O’Reilly, lead organizer since 2012, and the total of 180 on such a weekend is still impressive. The venue is unusual: all the chess is played in one room but there is a pit in the middle housing the U180 and U145 sections while the U120 and the Open take place on the surrounding raised section. Chess Direct provided the bookstall so it was good to have a chat with Andrew Butterworth who used to be a regular fixture at the Thanet Congress. An innovation that caught the eye of this writer was the team prize. Players were invited to form teams of four from any of the sections and their final scores were combined with the prize going to the highest-scoring team. 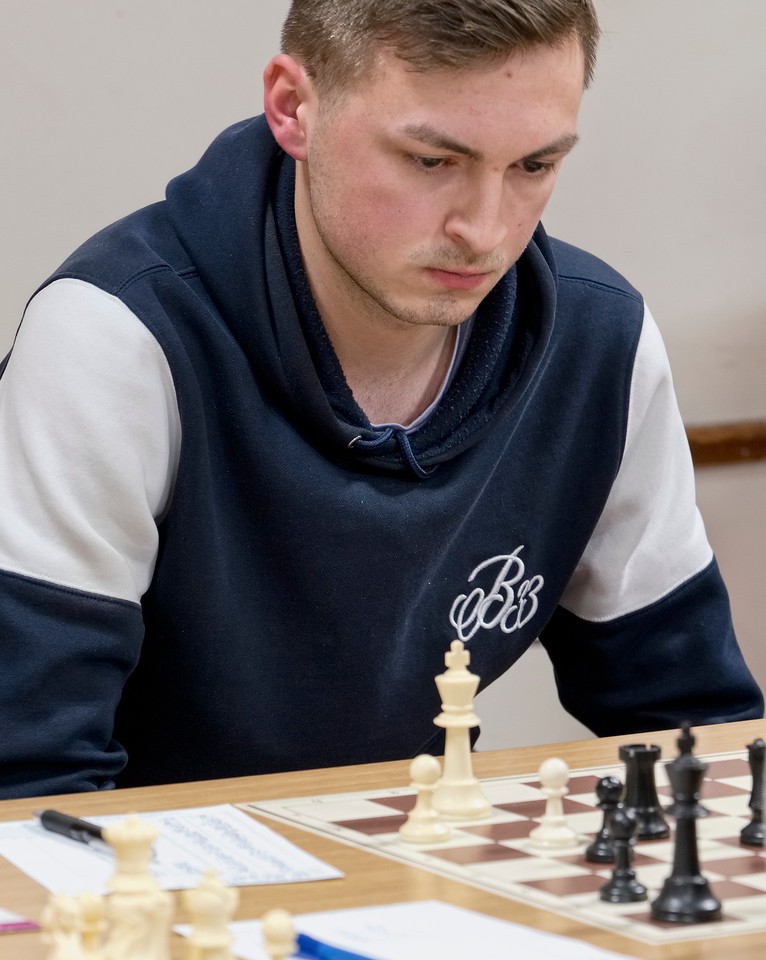 The Open section was small (21) but competitive and it is always satisfying when the two players in contention for first place are drawn against each other in the final round and so it proved this time. Marcus Harvey (left) had already come first equal at the ‘sister’ tournament at Witney so he had an extra incentive to win at Kidlington. Unfortunately, in his way stood (or sat) the formidable weekend specialist, Mark Hebden. However, youth prevailed, and Marcus became the Oxfordshire Individual Champion for the first time.