There have been some exciting games played in the past week, both online and over the board.

One of the most difficult tasks we all face is playing a much higher rated opponent. It is far too easy to be intimidated by their rank or reputation and play inferior chess. Our game(s) this week though show that this doesn’t have to be the case. In a very exciting clash, our very own Andy Flood was playing an opponent rated almost 600 ELO points higher (that’s a difference of around 80 ECF) Andy was not daunted by his task and traded blow for blow to reach the following position. 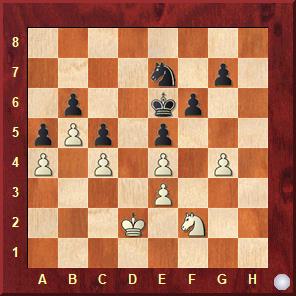 The game should be drawn now, although Andy was tricked by his opponent’s experience and superb endgame technique and had to eventually resign, 28 moves later! A brilliant performance none the less.

Despite the online heroics our game of the week was played over the board in the extremely strong Tata Steel Masters Event. Our ‘lowly’ ranked player is Russian Grandmaster Andrey Esipenko – his opponent? World Champion and World Number One Magnus Carlsen