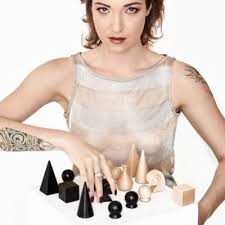 This photograph might at first glance appear to be a typical example of yet another lazy attempt to make chess more sexy. However, this is not so. The lady in the picture is Juga, a Chilean singer and keen chess player. Yes, I know what you’re thinking but read on.  She has written at least two songs on a chess theme, one of which is ‘Oh Capablanca’ which she performed at the closing ceremony of the recent Chess Olympiad. This is what she said about the song: “ ‘Oh Capablanca’ describes my emotional voyage through a twisted chess game, in which I suffered from over-optimism. Right after the game, I wrote this song to relieve my grief for losing a ‘winning’ position, which later I analyzed only to find out that it was not winning at all!  I have always been in love with chess. ‘Oh Capablanca’ was born in the middle of a classical tournament I played in Rome in December last year. It was the 5th round and I really liked my position. I was playing with White, an Exchange Variation against a Caro-Kann Defence.”  Now that must resonate with all chess players so check – excuse the pun – out her song on the link below and see what you think. There is a touch of the James Bond theme about it and personally I love the reference to consulting Stockfish after the game to learn that actually her analysis was flawed all along!