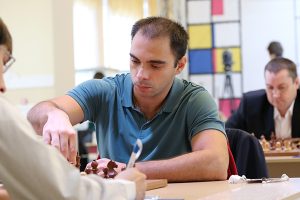 The 69th Russian Chess Championship has just concluded in Novosibirsk with a victory for Alexander Riazantsev. If this name is new to many people, this is not surprising. His ELO grade of 2651 made him only the eighth seed of the twelve in the tournament so while his victory does not quite sit alongside Foinavon winning the Grand National or Leicester City winning the Premier League, it was still a surprise. For the uninitiated, Riazantsev was born on September 12 1985 in Moscow and has been an international grandmaster since 2001. While he remained undefeated throughout the eleven rounds, his score of 7/11 included eight draws so it is fair to say that he can attribute his success to the fact that he achieved more wins (3) than any other player. However, just as the saying goes that the loser in chess is the one who makes the last mistake, the reverse is also true – that if you are going to win any game in a tournament, make it the last.  Here is Riazantsev’s crucial last-round victory. 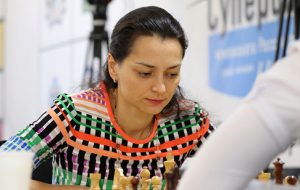 If the men’s result was unexpected, the same cannot be said for the women’s championship where Alexandra Kosteniuk won her second title with a score of 8½/11. Her total included seven wins with only one defeat and victory in this, her penultimate game, gave her the title with a round to spare. It is worth noting that after White’s 59th move, the computer says that ‘Black is much better’ but after Black’s reply 59…a4? it has the position as ‘equal’, by 62…Qb3 ‘White is much better’ and after 64…Qa4? ‘White is winning’.