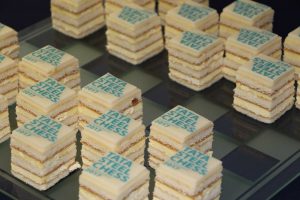 Even the sandwiches have class

The Tata Steel Chess Masters tournament, held annually at Wijk aan Zee in the Netherlands,  has traditionally been one of the strongest events in the chess calendar and this year’s competition which began today  is no exception. With five of the top ten players in the world taking part and an average grade of 2751, it is comfortably the strongest tournament ever held in…er…2017. Naturally we shall be following the fortunes of Broadstairs’ adopted son, Wei Yi, and he began with an unspectacular draw in round one – as did most of the players – so here is the only win so far which puts Ukraine’s world no.15 into an early tournament lead.