Congratulations to GM Deep Sengupta of India who has won this year’s Hastings International Chess Congress with a score of 7/9. Going into the final round, no fewer than 23 players were within a point of the leaders and of those, 12 had a chance of either winning or sharing the first prize. However, with four players on six points, realistically the race was between those four and the only one to win was Sengupta. After losing his second round match, he finished strongly, taking two and a half points off three top ten seeded grandmasters in his last three games. His final winning game is featured below. 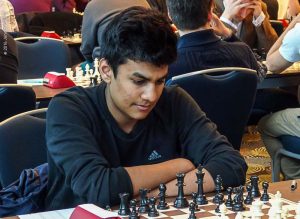 However, while Indian grandmasters dominated the top boards, you might be asking yourself who was the top Briton. Was it Mark Hebden? Danny Gormally? Glenn Flear? No, it was 17-year old Ravi Haria – as featured in our last post – who beat all three of the previously mentioned GMs on his way to 6½/9, joint second place. He also achieved his second IM norm, lost only one match and, for good measure, also scored draws against Bogdan Lalic and Keith Arkell: 4/5 against GM opposition! How about that?! One final note on Hastings: congratulations to Toby Stock, formerly of this parish, on winning the Weekend Major.  It was amusing to see his club listed as Broadstairs even though he has not played for us since moving five years ago, now resident in Cambridge.  Still, we don’t object to basking in a little reflected glory – just don’t tell the ECF.

Meanwhile, our attention now shifts to the Tata Steel Masters which begins next Friday (13th). With all due respect to Hastings, this is where the big boys come out to play with five of the world’s top ten taking part including Sergey Karjakin possibly looking for some sort of revenge against Magnus Carlsen, and our good friend, Wei Yi. He is well down the pecking order and recently lost a match against Richard Rapport of Hungary to ‘decide’ who is the best U20 player in the world. He may also be looking for revenge as Rapport is in the line-up as well.