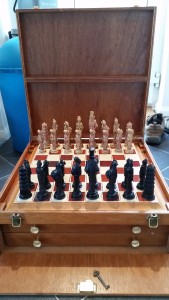 ndid chess set has been donated to the Club by Mrs Rowena Smith.  It has been in her family for many years and, as no-one played the game any more, she was looking for a willing home for it.  The pieces were bought by her father, who made the board and box, and gave it to her as a present for her sixteenth birthday.  The board can be lifted out of the box and there are two drawers underneath for the pieces which resemble Chinese figures and are made of resin. It has been suggested that we award the set as an annual prize and a provisional name for it is the Richard Pilcher Prize after Mrs Smith’s father.  Suggestions are welcome and, in the meantime, Reg  is looking after the set.  We would like to thank Mrs Smith for this generous gift and we fully intend to find a suitable purpose for it.

Semi-Finals at the Opera