Summer visitors to Broadstairs will be familiar with the weekly firework displays over Viking Bay (see below although it might be Singapore) and it seems appropriate that the first one this year will be tomorrow (July 18) which we would like to think is to celebrate www.broadstairschessclub.co.uk being awarded the title of  Website of the Year by the ECF.  The committee’s report described the website as ‘ordinary’ – praise indeed! Just in case anyone thinks this means we don’t deserve it, bear in mind that there were no fewer than six other candidates which were presumably even less ordinary – or possibly more…. 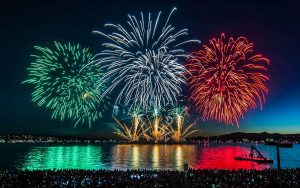 If that is not exciting enough, the awards committee named the Thanet Chess Congress as Congress of the Year 2018, a remarkable achievement as the congress has not yet taken place. No ‘ordinary’ congress this one, though – the citation was described as ‘outstanding’ although this accolade ought to go to Andy Flood for taking on the running of the congress last year and doing such a fine job.  Read the full list of awards here and don’t forget to enter the Congress of the Year 2018 which can be found here.