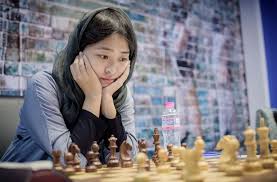 The 2017 Women’s World Chess Championship began in Tehran on February 11 and continues until March 3. 63 players are taking part in a six-round knockout tournament that has been surrounded by controversy since it was announced that all players would have to wear the hijab, leading to the refusal of several players to take part. Top seed, fresh from her triumph at the Tradewise Gibraltar Masters where she won the women’s first prize, is Ju Wenjun. If she can add the $60,000 first prize to the £15,000 she won in Gibraltar, it would make it a terrific start to 2017 for her. The odd number of players is explained by the death of the Romanian women’s chess champion, Cristina-Adela Foisor, last month. She has not been replaced and her opponent in round one has been given a bye.

Second seed in the competition is Anna Muzychuk of Ukraine who also had a fine tournament at Gibraltar, scoring 6/10, although her sister Maria, a former women’s world champion, is one of the absentees, saying that in her opinion “it’s absolutely obvious that Iran isn’t a suitable country for such a prestigious event.” An alternative view was understandably offered by the Iranian WGM Mitra Hejazipour, who said: “This is going to be the biggest sporting event women in Iran have ever seen; we haven’t been able to host any world championship in other sporting fields for women in the past. It’s not right to call for a boycott. These games are important for women in Iran; it’s an opportunity for us to show our strength.”  Unfortunately, we shall not be seeing any more of the strength of Iranian women’s chess for now as all three home players have already been eliminated.

The current world champion, Hou Yifan, is also absent from Tehran owing to her objection to the arrangements. Her mood at Gibraltar and bizarre protest in the final round may have had something to do with this defeat in Round 6 to her new rival and the favourite to take her crown.