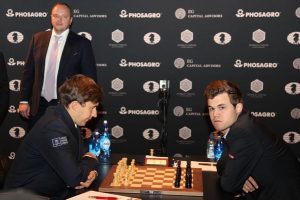 The much-anticipated World Chess Championship between Magnus Carlsen and Sergey Karjakin has finally started in New York. Fortunately, the dispute between the official organisers and the various chess websites around the world, the former threatening to sue the latter for any unauthorised coverage of the match, has been resolved and fans can now follow the games in a variety of ways.  The official site offers, for a reasonable sum, ‘live 360 degree coverage’ of the games for which, apparently, special glasses are required.

With such anticipation, it was almost inevitable that the first couple of games would be something of an anti-climax and so it proved. This was not what spectators expected, Carlsen having announced at the press conference that, “I’ll punch him until he finally knocks over.” If this was a new tactical variation on the popular sport of chess boxing it was not demonstrated in either of the first two games. Nigel Short tweeted that, “It is at moments like this when watching a game that I am grateful that I have plenty of wine in the house”. Still, as Garry Kasparov pointed out, “Often one of the best indicators that a chess game is interesting is that amateurs think it isn’t!” Nevertheless, it may be that the build up was, indeed, more interesting than the chess.

Let’s start with the venue. The Fulton Market Building has attracted some criticism and, while it was packed for the press conference, the main reason was that not only had those with tickets turned up but so also had those with complimentary tickets for Game One. Consequently, there were not enough seats and it was very much standing room only. The press conference was entertaining on a number of levels.  FIDE Vice President Israel Gelfer – taking charge in place of the President, Kirsan Ilyumzhinov, who was refused a visa to travel to the US (!), commented that this was the youngest World Chess Championship in history. He contrasted Botvinnik’s defence of his title to Tal when the former was fifty years old with the current match where both players’ ages combined only came to 52, each player 26 years old. (Carlsen then interrupted to say that he would not be 26 until November 30!). After initially mis-hearing one journalist’s question as to who he thought was the best chess player in the world (“I’m sorry, what was the question?”), Carlsen replied both tactfully and honestly, “I think that’s going to be decided in the next couple of weeks… Right now, if I may be so bold, I would say myself.”

After the main press conference there was a second for the Russian press which, presumably, Carlsen did not attend. When asked then about his chances, Karjakin replied: “I dream of returning the crown to Russia.”  The President of the Russian Chess Federation, Andrey Filatov, said that during the recent Olympiad many ‘chess experts’ had told him that Karjakin’s chances were about the same as Donald Trump becoming U.S. President…..However, before Karjakin’s supporters break out in a chorus of ‘We shall overcomb’ (sic), it is worth noting that while this may be a term lost in translation – the official website for the Russian Chess Federation in its report on the press conference, twice referred to Karjakin as the ‘runner up’ when, presumably, they meant ‘challenger’. We shall see.