Welcome to the 2018 British Chess Championships and welcome to Hull. Some years ago in an episode of ‘Last of the Summer Wine’, a character was introducing himself to the others. “I come from the Far East,” he said. “China?” they asked. “No, Hull,” came the reply. Driving east on the M62 – it’s over an hour from the M1 by motorway – Hull does indeed feel like the Far East. The first clue to the inevitable ‘Are we nearly there yet?’ is the appearance of the magnificent Humber Bridge, looming large by degrees until you drive underneath and can really appreciate its size.

Most people are aware that Hull was the UK City of Culture 2017 and home to Hull City F.C. who play at the KCOM Stadium but hands up if you know what KCOM stands for? No? Well, that’s the problem because the original name was the KC Stadium after its sponsors, Kingston Communications, but few people knew that and it is debatable whether the change to KCOM has made any difference. 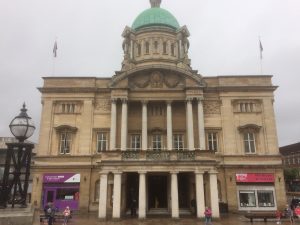 But what about the chess, I hear you ask? The Championships are being held in the City Hall (see left), bang in the middle of the city which is handy for everything. The building dates from the early 1900s but the organisers have managed to install some kind of air conditioning which is an improvement on Canterbury a few years ago. The first thing you notice about the players is the extraordinary age range: 8 to 80 would be a conservative estimate and some of the juniors are frighteningly good. Many of the players double up by playing one game in the morning and a second in the afternoon…..every day for five days. Ten games in a week and sometimes the weekend congress, too. Fifteen games! And this is the new shortened version of the Championships, which used to last for two weeks.

Watching people playing chess is an acquired taste and not for everyone. When Kasparov played Karpov in London in 1986 The Sunday Times headlined an article on the match, ‘Who would pay £10 to watch two men think?’ and the question was not entirely facetious. Who, indeed? (Well, me for one because I was there.) Admittedly, the players in this tournament were not exactly Champions League – top seed Michael Adams is currently the world no. 41 – but they were certainly Premier League and it cost nothing to see some top class chess. 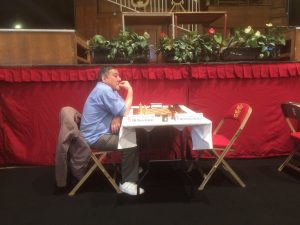 On Monday I was there for round 3 and most of the leading players were on 2/2. The dynamic was fascinating. Mark Hebden (see right) and Tamas Fodor both arrived early, Hebden seemingly relaxed but Fodor was clearly ‘in the zone’. When Adams took his seat to play the latter, there was no apparent acknowledgement from either player. Adams spent some time arranging his pieces then felt he had to do something so he strolled over and spoke to Hebden. By contrast, Gawain Jones chatted amiably with his opponent, Daniel Fernandez. James Adair looked relaxed as he arrived to play David Howell and smiled at Hebden who said something in return. Jonathan Hawkins arrived just before the start and Hebden rose to shake hands. Curiously, Howell was over seven minutes late. Of the games, Howell-Adair was the most interesting and I’ll try and dig it out and post it for those who have not seen it already.

What else is there for the casual observer? Well, there are well-known names to check out such as the current wunderkind, Shreyas Royal, and some not so famous such as our favourite arbiter, Kevin Thurlow, who as I write must be hoping for a better second half of the week after a wretched start. And who’s that handing out scoresheets and re-setting clocks? Looks like our former Chairman, Alan Atkinson. The commentary is always worth a visit but we miss Chris Ward and Andrew Martin who were reliably entertaining. The bookshop was predictably quiet as it involved parting with money which does not come easy to the average chess player. A casual glance revealed James Essinger’s ‘The Mating Game’ (‘Steamy’ – The Sun) on sale but sadly no sign of ‘Heaven and Hell’ by Michael Doyle.

After a parting check on the top games, it was time to go but there was plenty more for the chess players to enjoy that day as it was announced at the start that the evening’s entertainment would be a visit to the casino. This elicited no reaction whatsoever from those on the top boards suggesting that they were definitely not here for fun.

STOP PRESS: Beware fake news – in the last posting it was stated that the John Couzens Vase had been won by David Faldon. In fact, the final has yet to take place and as Paul Carfrae, the other finalist points out, he ‘may have some input into the outcome’! Apologies.

Chess Festival turns up the Heat