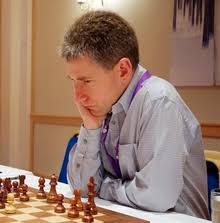 I don’t suppose it will come as a surprise to many people to learn that Michael Adams won the 2018 British Chess Championships for the sixth time but what may amaze chess followers is that he first won it as a 17 year old in 1989 and that since then – although he has missed a few tournaments for one reason or another – he has never been beaten at the British!  How different it might have been had Tamas Fodor not made this horrendous blunder in Round 3:

Here it is White to move and precise play could (should?) have won the point. Stockfish had White as slightly better at this stage at 0.77. However, with one move this had changed to ‘Black can mate in eight moves’! If you haven’t seen this game, try to guess White’s fatal error before going to the next line.

It probably did not take Adams long to realise this was indeed his lucky day.

Meanwhile, at the next board, a contender for Game of the Tournament was being played between David Howell and James Adair that certainly grabbed the attention of the onlookers.

Howell and Gawain Jones, both former British champions, were seen by many as Adams’ main rivals. Draws against Jones and Adams in the next two rounds put Howell in a strong position coming into the last round, unbeaten and level with Adams, where he met Luke McShane. 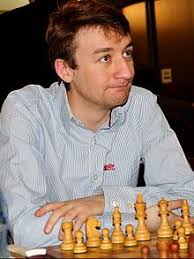 As was pointed out on Twitter, there is a zugzwang after Black’s 30th move (30…h4), and if White had tried 31.Ra4 then Black would play 31…a5 when 32.Rc4 is dealt with as in the game. Victory here, which was voted as Game of the Tournament, gave McShane 7/9 level with Adams who drew his last game, resulting in a tiebreak. First, two rapid games were played with 20 minutes and 10 seconds increment on the clock. Adams won the first one convincingly and looked on course to win the second before McShane found a Get out of Jail Free card and the score was 1-1. Two games of five minutes plus three seconds increment were scheduled. Adams won both blitz games, claiming his sixth title and the £10,000 first prize. McShane earned £5,000 as runner up.

So Adams wins his sixth title and McShane, who also lost in a play-off last year, is already being seen as the Jimmy White of British chess!