Never mind about Norway, I hear you say, what about Broadstairs? Well, as everyone knows, the club continues until the Thanet Chess Congress – still plenty of room: see http://www.thanetchesscongress.co.uk for further details – and the various club competitions are nicely coming up to the boil. In the Goodall Cup, the blue riband of Broadstairs club competitions, it is looking like a two-horse race between David Faldon and Nick McBride unless Ian Hames can win all his remaining seven games, six of which are against players in the top half of the draw. David might have expected at least a share of the trophy after Nick’s surprise defeat by Bob Page earlier in the season but Bob threw another spanner in the works by swindling a draw against David in their match. This means that victory for Nick in his match against David may give him the cup outright.

Two of the five rounds of the Summer Swiss have been played with Nick, Bob and Paul Carfrae the only players on two points. These scores are, of course, irrelevant as the prize goes to the player with the best grading performance over the five rounds. If past history is anything to go by, this is unlikely to be the player with the highest score.  The knockout tournament for the John Couzens Vase is at the quarter-final stage and victory here is anyone’s guess as it is a time handicap where it is not unusual to find strong players given only ten minutes against weaker players’ one hour fifty! Finally, on July 3rd there is the traditional end of season event, the Broadstairs Blitz after which we hope as many members as possible will join us in the pub to celebrate the club’s successes in the Team Buzzer and Jamboree tournaments. 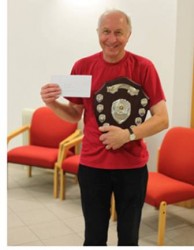 One of the trophies awarded at the Thanet Congress is the Oyster Shield which goes to the Thanet player with the highest score in either the Minor or Intermediate sections. It was donated to the Congress by Whitstable Chess Club and the inaugural winner was our own Reg Pidduck and here he is collecting his trophy and cheque in 2011. This has become quite a custom for Reg because he has gone on to win the award on a further three occasions including the last two years so he’ll be aiming for a hat-trick at this year’s Congress which, don’t forget folks, is on August 18-20. (Mind you, he hasn’t entered yet…)