When Capa came to Thanet (part 2)

In 1936 the second Margate International Chess Tournament took place and, once again, the former World Champion, Jose Raul Capablanca, was invited and accepted. The good news for Capa was that there was no Reshevsky but the bad news was that he was second again. The winner was the Czech GM Salomon Flohr who was undefeated in the tournament, scoring 7½/9 and winning more than half of his matches. Also returning from the first tournament were Stuart Milner-Barry, Vera Menchik and Sir George Thomas. 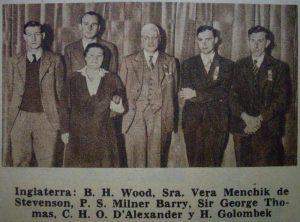 The England team for the 1939 Olympiad

Milner-Barry was one of the most gifted British chess players of his generation. Winning the first British Boys’ Championship in 1923, he went on to play for England from 1937-1961 and was President of the British Chess Federation between 1970 and 1973. He also has two chess variations named after him: the Milner-Barry Gambit against the French Defence, and the Milner-Barry variation of the Nimzo-Indian Defence. His most important contribution, however, was his work as a code-breaker during the war at Bletchley Park for which he was recruited by his friend and fellow chess player, Hugh Alexander. At Margate in 1936 Milner-Barry lost only three games out of the nine, two of which were to Capablanca and this one to the eventual winner.