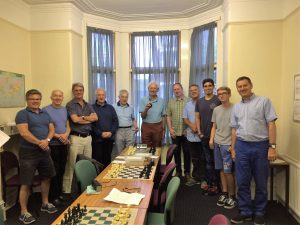 This photograph was taken on David Horton’s last appearance at Broadstairs Chess Club yesterday. Keen visitors to this site may remember we held a special event last September to celebrate David’s fifty years as a Broadstairs player (see link below).   Since that occasion, David has decided to move to Cheltenham to be nearer his family. All we can say is that Broadstairs’ loss is Cheltenham’s gain. The photograph shows David holding what must be the smallest trophy ever awarded and this is the George Stiggers Trophy given to the player whose grade has increased the most since last year i.e. the most improved player and this year it was won by David who is clearly improving even after fifty years.  As one fellow member observed, “There is hope for us all yet!”

In the picture from left to right are: Paul Carfrae, Reg Pidduck, Bob Cronin, Michael Doyle, David Clifford, David Horton, Nick McBride, John Couzens, Jordan Leach, Ronan Doherty and Bob Page. Also present that evening although arriving too late to be in the photo were Michael Jenkinson, David Faldon, Andy Flood and Ian Hames, not forgetting Brian Gutierrez who took the photograph – an impressive turnout for August, a month when many clubs have already been closed for three months. 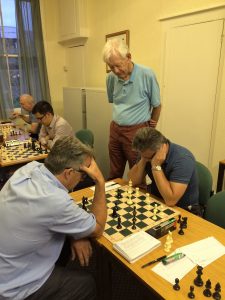 David had already ensured that he completed all his obligations to the club competitions and, as leader in the clubhouse, he may yet finish his final season in style by winning the Goodall Cup fifty years after he won it for the first time.   He stayed long enough to cast an eye over some of the games taking place – on the right are John and Paul playing their final Goodall Cup match – before bidding farewell with handshakes all round.