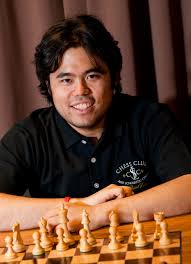 While congratulations go to Hikaru Nakamura for his victory in the Tradewise Gibraltar Masters – and commiserations to the unlucky runner-up, David Anton Gujarro after a play-off – the sensational news from Gibraltar today was not a victory by anyone but a defeat….and a deliberate one.  In what GM Stuart Conquest described as ‘the biggest crisis to hit chess in fifteen years’ (why fifteen? what happened in 2002?), our favourite female Chinese GM, Hou Yifan, amazed everyone in her final match by resigning after five moves. This was no blunder as you will see from the details below. In an interview afterwards Hou Yifan said that she was ‘upset’ at having been drawn against seven women in the first nine rounds and felt that this was not fair on the other women players although it did not do Ju Wenjun any harm as she won the women’s first prize of £15,000, beating Hou Yifan on the way.  The tournament organiser, Brian Callaghan, was sympathetic but pointed out that the draw is done by computer and that was the way it turned out.  I suspect we have not heard the last of this.