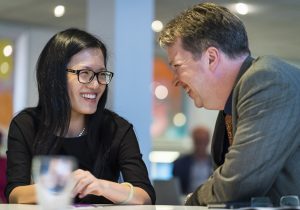 Regular visitors to this site will know that we take a keen interest in upcoming Chinese grandmasters, especially Wei Yi and Hou Yifan. Well, the highlight of the 20th Hoogeveen Chess Tournament running from 15-22 October in Hoogeveen Town Hall in the Netherlands is a 6-game classical match between Hou Yifan and Nigel Short. Before the match Short confirmed that he had once stated that ‘men on average play better than women’ but clarified it by adding ‘Hou Yifan is not average’! The first game took place this afternoon (Sunday) and Short appeared to have the edge as the game entered its closing stages. Hou Yifan dug in, however, and held on for a draw. She will be hoping for the sort of form that seemed to elude her at the recent Isle of Man International except for this gem in round one.