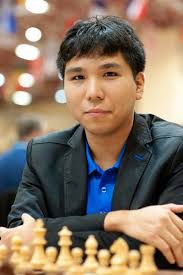 The 2016 London Chess Classic, the final leg of the Chess Grand Tour, began on Friday and features all of the world’s top 10 apart from Magnus Carlsen and Sergey Karjakin. Wesley So leads the Grand Tour after three of the four rounds and with the World Champion absent, he is the favourite to win the overall prize money of $100,000 ($75,000 for the winner of the London Chess Classic). Hikaru Nakamura, the only person who can stop Wesley from taking first prize, was drawn with the white pieces against him in Round 1 and blundered with 13.Ne2?, giving So a comfortable victory which he followed up with another win in Round 2 after another blunder, this time from Michael Adams. As the only player with a 100% score after two of the nine rounds, So’s position as favourite is even stronger now than it was at the start. In beating Adams, So took his rating beyond 2800, only the 12th player in history to achieve the feat. A draw in Round 3 maintained his half-point lead at the top.