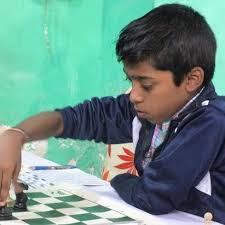 Portrait of a prodigy

How old were you when you gained your first GM norm? What do you mean, you haven’t got one? OK, when did you become an IM? You mean you aren’t even an IM?! Meet 12-year old IM Praggnanandhaa who qualified as the world’s youngest ever international master in August when his grade reached 2500 and he has achieved his first GM norm in the World Junior Championship that has just finished in Tarvisio, Italy. To put this in perspective, Praggnanandhaa was the 26th strongest player in the tournament, he beat the number one seed, GM Jordan Van Foreest (2616), in Round 4 and two other grandmasters on his way to an unbeaten 8/11. Draws in his final three games meant that he narrowly missed out on a medal with players 1-3 all finishing on 8½/11. First place would have given him the GM title outright.  While Praggnanandhaa’s victory over Van Foreest may have grabbed the headlines, his win in Round 8 against another grandmaster that won him the first of his GM norms.