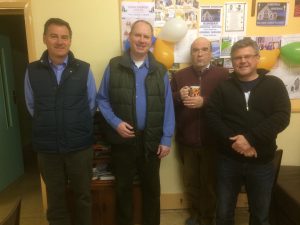 All hail the conquering heroes! Broadstairs ‘A’ won the Team Buzzer for only the second time since 1990 with a storming performance against all the other…er…two teams (one of which was Broadstairs ‘B’).  It was disappointing that none of the other Thanet League teams turned up but well played Broadstairs in managing not only to be there but to put out two teams. Indeed, as Colin Gregory wryly pointed out early in the evening, it looked as if only two teams turned up and Margate would come third.

For those unfamiliar with the format of the Team Buzzer, it is quite simple.  Once players are paired, a buzzer sounds every ten seconds and players must move on the buzzer – not before and not after or you lose the game. An illegal move also results in a loss as does failure to recognise a check when the king can be taken and the game ends. 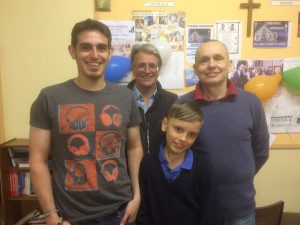 It was decided that the competition would be an all-play-all double round and the ‘A’ team began with an excellent 3½-½ win against Margate but round two between the two Broadstairs teams saw the first surprise when Tim beat David on Board 1. Fortunately, the other three ‘A’ team boards managed to hold on for a 2½-1½ victory and the last two rounds were 4-0 formalities. The ‘B’ team did not disgrace themselves and it was a good evening for the Selyukovs as Viktor also managed to win a game, defeating Clive Le Baigue. Indeed, Viktor proved to be a tough opponent in all his matches, achieving an excellent draw in the first game with Paul Carfrae.

The last time Broadstairs won the Team Buzzer was in 2012, once again with an ‘A’ team consisting of David Horton, David Faldon, Nick McBride and Ian Hames. Before that we have to go back to 1990 when Broadstairs won with Mac Greaves, Bob Page, Hugh Hosking and Alek Zielinski. Many thanks to all those who played and the trophy will be presented at the Thanet AGM in July.