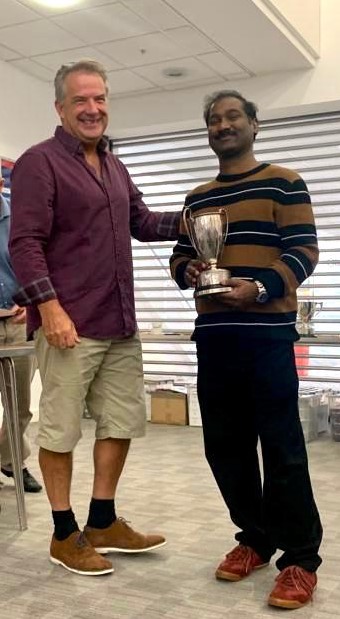 Manoj with the Kent Intermediate Trophy

Twenty-four players entered the Intermediate Section of the congress (U131) and the winner at his first attempt was Manoj Natarajan with 4½/5. Manoj joined Broadstairs Chess Club in April and his victory meant that four of the five sections were won by Broadstairs players which if it is not unique is certainly unusual. Having beaten the top seed in Round 1, a player who hailed from Bude in Cornwall, Manoj was then drawn against another man from the West Country in Terence Greenaway from Torquay in Round 2. There is absolutely no truth in the rumour that Manoj has had to cancel his holiday in Newquay for next year. Here is his Round 2 win and thanks again to Trefor Owens for his comments.