Wesley So wins at the double

Wesley So completed a very satisfying nine days in London by winning both the London Chess Classic and with it the Chess Grand Tour for 2016.  Victory in the former nets him $75,000 while the latter is worth $100,000. His victory was completed with a round to spare, thereby making Round 9 today something of an anticlimax although the only victory of the round was an achievement of sorts for Veselin Topalov in what has been a wretched tournament for him.  So’s victory takes him over the 2800 barrier and up to fourth in the world rankings. Chess commentators are already talking about a possible world title challenge in the future and, let’s not forget, while people are always talking about the youth of the current world champion, So at 23 is three years younger. 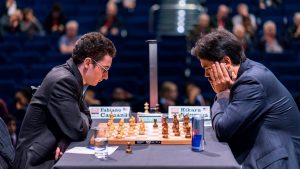 Runner-up in London was Fabiano Caruana who is only a year older than So and is now just thirteen points behind Magnus Carlsen in the world rankings. His terrific win over Hikaru Nakamura in Round 6 involving an audacious queen sacrifice was the game of the tournament. Caruana was clearly not surprised that Nakamura played a sharp Najdorf as he explained afterwards: “In the US Championship (Nakamura) said it was a must-win game in Round 3, so maybe here he thought it was a must-win game if he wanted to win the Grand Chess Tour.”   The key move was perhaps not 19.Qxf6 or any of those immediately preceding or following but probably White’s 21st.  Mere mortals like your correspondent would no more contemplate sacrificing a queen in White’s position after nineteen moves than they would cutting off their right hand.  However, 21.Nc6, which Nakamura was clearly expecting, would at least win back the queen but with an uncertain advantage. Instead, what followed was 21.Nf5!! after which Nakamura spent 35 minutes realising that he was in serious trouble. Caruana explained: “I’d analysed this and the computer doesn’t show 21.Nf5. The problem is that the computer doesn’t understand that after 21.Nf5 Bxf5 Black is pretty much just lost. It’s one of the saddest positions I’ve ever seen for Black.”  Judge for yourself.