When Capa came to Thanet (part 1) 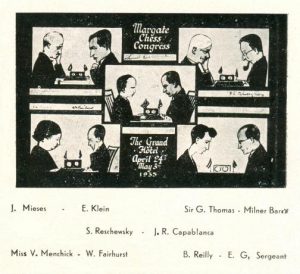 While most of world’s leading chess players gather in Stavanger for the Altibox Chess Tournament, it is worth looking back to a time when a Thanet club was the centre of the chess world. Sadly, it was not Broadstairs but for five years in the 1930s Margate managed to attract some of the strongest players in the world to compete in a series of international chess tournaments. The first of these was held in the Grand Hotel in 1935 and featured the former world champion Jose Raul Capablanca, the American prodigy Sammy Reshevsky and a number of British stalwarts including Stuart Milner-Barry, Sir George Thomas and Vera Menchik. Not surprisingly, Capablanca was favourite to win but his defeat by Reshevsky was decisive and the American went on to win the tournament with an unbeaten score of 7½/9.