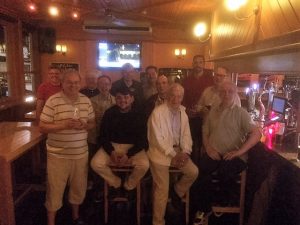 Winners and losers celebrating in the pub

The annual Broadstairs Blitz took place at the club on Monday July 3rd. When many clubs are well into their ‘close season’, Broadstairs is still going and with three competitions yet to be decided, the club will remain open until August 14th. Last year the it was the Brexit Blitz and as it is hard to avoid the soap opera that is modern politics, this year the theme was was the Blunder Blitz: Superman v Blunder Woman  – no prizes for guessing who this was based on. Sixteen players, all from Broadstairs Chess Club, were divided into two teams, the Supermen and the Blunder Women. The teams were picked on current grades and on recent form it looked as if the the Blunder Women had the edge with Ian Hames and Paul Carfrae, Blitz specialists, on the same team. However, it did not work out that way.

The first two rounds were close with few surprises and the scores were level. In round 3 the Supermen took the lead and never looked back.   Further wins in rounds 4 and 6 extended their lead and in the final round, with the Blunder Women needing a 7-1 victory to win, the Supermen had their best round, winning 6-2.  Final scores: Supermen 36½ Blunder Women 27½.  Highlights of the evening were fine performances from David Faldon, 8/8 on Board 1 for the Supermen, and 4/8 for Joshua Vaughan (grade 86) for the same team. Your correspondent still cannot quite understand how he lost to Ian Hames, allowing his king to be taken with one second left on the clock.  The post mortem concluded that the Blunder Women lost because they made too many blunders. Afterwards most of the players adjourned to pub to celebrate another successful season: steady membership, victory in the Team Buzzer and the Thanet Shield and joint winners at the Jamboree.