After an exciting Candidates tournament, we now know who will challenge Magnus Carlsen for the World Chess Championship later this year.

The event was won by Ian Nepomniachtchi, the reigning champion of Russia.

Nepomniachtchi is an exciting player who has every chance of dethroning Carlsen. In my opinion one thing for certain is that he will play to win the Match and won’t be content to be just taking part. I think that chess fans across the globe can look forward to a much more entertaining Match than we witnessed in 2018 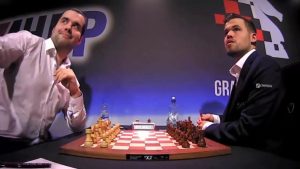